If you want a good shot at a whitetail, water down your approach. 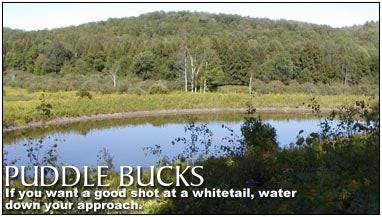 It is the second week of July, and Ted Marum and I are working like a two-man chain gang. Wielding picks and shovels in 90-degree heat and can’t-get-a-breath humidity, we hack away at a small wash in a steep hillside. Dirt flies, rocks tumble, and sweat soaks our clothing. Finally, after a half hour of constant digging, Marum calls a halt and steps back, satisfied. Then I help him lower a 110-gallon plastic tub into the hole we’ve excavated. The tub settles in nicely, and we backfill around its edges until the tub is anchored in the wash as if it had always been there. Marum smiles and nods. “Now we wait for rain,” he says as we gather our tools and slog back up the hill.

To Marum, owner of western Wisconsin’s Buffalo County Outfitters (715-946-3409), we have just completed a preseason chore as important as scouting and hanging stands. We’ve built a pond.

It won’t be much of a pond, of course. Rainfall will trickle down the wash and fill the little tub with water no higher than a retriever’s back. But Marum makes a bold prediction as we leave the site. “My hunters will kill at least one big buck over that tub in early season. Through pre-rut and rut, maybe two or three more. We’ve just made this spot 10 times more attractive to bucks than it was an hour ago.”

Thirsty Bucks
Last year, more than half of Marum’s clients killed trophy bucks. Many of those deer were on or approaching water holes. Food, travel, does, and safety are all important to a mature whitetail buck, but Marum is convinced water is an overlooked commodity. “I believe most hunters think like I used to, that deer get most of the water they need from the green plants they eat.”

It took, of all people, Marum’s mother to show him the error of his ways. A devout and successful deer hunter, Joanie Marum was looking for a spot to kill a nice buck a few years back and asked her boy if he had an empty stand. “I had one hung near some trails behind my house that no one was sitting,” he recalls. “It was right along a logging road that came off a steep hillside. Rains had washed the road and eroded it, so I’d made a berm in the road to stop the runoff. A big puddle had formed at the base of that berm.”

That the stand was a chip shot from the puddle was a coincidence. That Mother Marum was covered up in bucks for the next few days was not. “It had been a warm fall, and my buddies and I were seeing zero buck activity,” Marum says. “But Mom missed a big buck on each of the first two evenings, then killed a monster on the third night. On the fourth night I put another friend in the spot and he nearly had a shot at a Boone and Crockett 8-point. Every one of those bucks was coming right to that puddle.”

The experience made him think seriously about water. “The more I thought it over, the clearer it became. Even in early fall, 98 percent of whitetail foods-browse, grain, acorns, even alfalfa-are dried down and offer little moisture. Then comes the rut, with bucks and does running night and day. Add a warm fall, which we get a lot of lately, and water gets even more important.”

It took him a while to realize that the location of the water dictated not only its attractiveness to bucks but also its viability as a hunting site. “You can visit most any water source and find deer tracks,” he says. “But when are they hitting it? I needed water sources I knew bucks would come to when my hunters could shoot them.”

A Quick Drink
The answer, Marum has found, is finding water in dense cover or as close to bedding areas as possible. “One thing you can never forget about deer-especially big bucks-is that they’re lazy,” he says. “They’re always going to use the easiest path, the closest food, the most convenient water that they can. If there’s a stagnant pool 100 yards from a buck’s bed and a free-flowing stream 1/4 mile away, he’s coming to that pool first. It’s haard for hunters to accept because the water looks scummy, but deer have cast-iron stomachs. That water doesn’t bother them one bit.” So Marum began setting stands near water sources where the big bucks he’d scouted wouldn’t have to work too hard to nab a drink: ponds, streams, seeps, springs, and puddles close to bedding areas.

And if one of the hunting areas didn’t have a convenient watering site, Marum would create one. On his own property, he hired an excavator to dig ponds. “I’d find the spot, pick my stand tree out, then have him dig the pond so I could shoot right to the bank,” he says. On land he leases, Marum will send the excavator in if the landowner okays the project. If the machinery scares the farmer off, Marum asks if a removable landscaping tub is acceptable. The smaller project rarely gets turned down, and Marum is just as happy. “I’m convinced you could kill a buck over a 5-gallon pail if you put it in the right place and kept it full.”

The closer you get to a bedding area, the greater the risk for bumping deer and educating bucks, and Marum is fanatic about hunting unobtrusively. “I’ve found that getting a silent approach and exit from the pond is critical,” he says. “My best ponds are close to a logging road that my hunter can walk quietly on. Then I brush a silent walking trail from the road to the stand.”

Last year, Marum had three bowhunters kill monster bucks in as many days from the same stand overlooking a pond. Close encounters and near misses pile up in Marum’s logbook with a startling redundancy. “One of the best was a hunter who’d listened to a buck chasing a doe all morning,” he recalls. “Finally the doe came running to the pond, belly flopped in, and literally sat in the water, her chest heaving. Of course the buck-a brute of a 10-point-trots right in behind her and stands at the bank, waiting for the bath to end. When the doe ran off she dragged the buck along, and my hunter never got a shot. But he came back to camp pretty excited and wouldn’t sit anywhere else the next day.”

Marum had to smile about the hunter’s refusal to budge. His mother had reacted the same way about a certain stand over a little puddle just a few years back.