It happens. Get a grip. 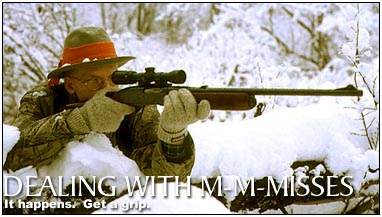 Want to give yourself angst-ridden dreams until next season? Whiff a shot at any deer you want badly. Care to burn those nightmares into your psyche? Punch a hole in the air surrounding a buck of a lifetime. I’ve managed both stunts, and I have the memories to prove it.

It’s small consolation, but I have lots of company. As one of my friends puts it: “If you ain’t missed a few, you’re either lying or you ain’t hunted very long.” I’ve chatted with some of the country’s best whitetail hunters, and they’ve all got stories of misses that’ll bring tears to any deer hunter’s eyes. The difference, of course, is they learn from their mistakes and go on to kill big whitetails. You can, too, if you follow their example.

Analyze This
In the aftermath of a miss, many shooters are shrouded in a fog of disbelief and denial. Do your best to avoid it. Instead, try to remember every detail of the shot-where the buck stood, your aiming point, how you performed. The reason is simple but profound: The first step in fixing a problem is knowing what the problem is. If all you can tell your hunting buddies is “I missed and I don’t know why,” think harder. Somewhere in the sequence of events, something went wrong, and you need to figure it out, because step two requires you to…

Look in the Mirror
We all want to perform flawlessly, and accepting that we didn’t can be nasty medicine. But the truth is, that arrow or bullet went on the path that you sent it, and it was the wrong one. If you forgot to pick a spot or jerked the trigger, own up to it. So you misjudged yardage or your scope wasn’t on-whose fault was that? Your rifle is only as good as you are, and the best shots are the guys who can determine what they did wrong on a bungled shot. Then they take great pains to correct that mistake. Interestingly, they’re also folks who commit themselves to¿¿¿

High-Percentage Shots Only
Blackpowder hunters aren’t, by nature, better shots than the guys who go afield with a contemporary rifle and a banana clip. However, they tend to be more effective because (a) their firearm demands an up-close animal and (b) they’ve only got one shot. Follow their lead: Restrict yourself to animals you know are within your range. Pass on running shots. Don’t try to punch brush. Wait for a clear view to the buck’s boiler room. You’ll shoot less frequently, and some bucks will walk right out of your life, but when you finally fire, you’ll likely be making venison. If you do miss, you’ll be much more likely to¿¿¿

Shrug It Off
My cousin is an expert marksman, one of those guys who practices so hard and is so accurate that he’s honestly surprised when he misses. Know what Scott does in the aftermath of a whiff? First he figures out how he blew it…and then he laughs at himself. Scott doesn’t expect himself to be perfect, and he knows that tomorrow is another day. After watching many deer hunters brood and stew and fume about missing, I find Scott’s attitude refreshing and a much quicker path back to the confidence it takes to be a great shot.