It's not over until the new ones breed. 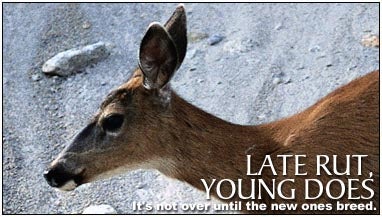 After the hot and heavy primary rut, does that have been bred shun courtship. While subsequent rutting activity lacks the widespread intensity of the first round, dominant bucks continue searching for mates at a time when young does undergo their first estrous cycle. These inexperienced whitetails are less wary than older does and more likely to lead a big buck to you.

Take advantage of this by hunting from stands overlooking busy travel corridors linked to major food sources. Bucks regularly cut the trails of does moving to and from feeding areas to scent-check for ready partners.

When a buck finds the doe he’s looking for, he dogs her as she follows her regular feeding schedule. A young doe preoccupied with a buck on her tail shouldn’t detect you, provided you keep downwind.

Calling from a stand is also a good bet. Try deep buck grunts, and don’t overlook the fawn bleat or bawl. A young doe in estrus for the first time is little more than a large fawn, and she may bleat in fear when harried by a large buck. This stressful sound can compel a late-season buck to investigate.

Calling blind every 20 minutes or so may turn the trick. Even better is calling to a buck you see passing out of range. A few grunts or bleats may be all it takes to stop the buck and start it in your direction. If not, a short, alternating series of buck grunts and fawn bleats may be more than the buck can resist.

Consider purchasing a foolproof can call that emits especially realistic bleats. Quaker Boy’s Bleat in Heat and Primos’ Easy Estrus Bleat are two popular models. Tip over the can, turn it upright, and it produces a wonderfully mournful bleat.

Alabama’s Eddie Salter, a noted hunter who has pursued whitetails across the country, favors the True Talker from Hunter’s Specialties. This adjustable call makes everything from deep buck grunts to fawn bleats. Combining calling with rattling has also brought him many late-season bucks.

“In states where does far outnumber bucks, I’ve had more success calling and rattling after the main rut is over,” Salter says. He believes that so many does are available during the primary rut that bucks don’t have to compete for them. Thereafter, he reasons, receptive does become scarce and bucks are more inclined to battle. He makes the most of this opportunity by setting up a tree stand in mature woods downwind from underbrush in which he has found numerous rubs and scrapes.

“It’s best to hunt with a partner,” he advises. “One partner takes to the tree stand, which faces in the direction of the cover. The other hunter, the caller, sits on the ground against the tree facing the other direction. Frosty mornings are best.”

When calling, Salter first emits three or four deep buck grunts and waits a few minutes. He then starts hooking bushes and pounding the ground with antlers to emulate two bucks sizing each other up. He pauses again before lightly clicking the antlers.

“I’ll click the antlers gently for 10 or 15 seconds, stop, and wait. I go through three rattling sessions, increasing the intensity of the rattling each time. The whole series takes maybe 20 minutes. If nothing shows up, we head for the next spot.”

Hopping from one place to the next, Salter hits several locations over the course of a day. On some days, he brings in three or four different late-season bucks.