Millions of Field & Stream readers loved the lower forty series, but this selection stood out among them all. 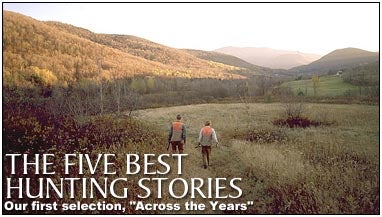 Some readers of these stories have asked me whether Hardscrabble is a real place, and the Lower Forty is a real club, and the members are real people. Of course they’re real, as real as I can make them. Hardscrabble is any small town, and Uncle Perk’s (“Jno. Perkins, Prop., Guns & Fshng Tckl Bot Sold & Swopt”) is any country store where local sportsmen gather to argue and brag and tell tall tales over a jug, and the Lower Forty is any circle of old friends who have hunted together in the cold, and fished in the rain, and shared the same memories over the years.

The characters of Uncle Perk and Doc Hall and Cousin Sid and Mister MacNab were based on people I’ve known, or several people combined into one character; but Judge Parker was actually himself. His original was my friend Parker Merrow of Center Ossipee, New Hampshire, a country editor and municipal justice and authority on antiques and modern firearms, a man of wisdom and modesty and understanding. Whenever Judge Parker scowled over his spectacles at a game violator in a Lower Forty story, it was Parker Merrow scowling. When Judge Parker connived to outwit Deacon Godfrey, or donned a nursemaid’s uniform to sneak up on a wary crow, or explained the mental processes of a King Beaver, it was Parker Merrow’s own Yankee humor, and I set it down as he told it to me.

He died suddenly the other day. It is still hard to believe it. A tall tree stands on a mountaintop, and every day you have seen it there, and one day you look and the tree is gone, and there is an empty place in the sky. There will always be an empty place. I’ve known a few great men in my life. Parker Merrow was one. He sent me a copy of a letter once, written a couple of hours after he learned that he was a grandfather. His son Lyford, then an Air Force officer stationed in Japan, had just become the father of a baby son; and Parker read the cable and slipped a sheet of copy paper into his portable and typed out some lines to the grandson he had not seen. I’d like to reprint them here, because they sum up the real Judge Parker better than anything I could write:

TO MY GRANDSON:
This letter will be yours on your 16th birthday. If I am alive then, I will read it to you. If I have checked out before that date, please go off by yourself, alone, and read it aloud.

Three hours ago your father cabled me that you were in this world, that you and your mother were doing well, and that you will bear my father’s name.

So for three hours I have been celebrating your birth in an orderly and thorough manner. I have given your grandmother a couple of tranquilizer pills to calm her hysterics at the good news. I have notified all your father’s friends in town as he requested, so they can celebrate also. I have stopped at the bank and arranged a modest trust fund which should see you through college. I have had several drinks, and now I am writing a letter to you to open 16 years later.

I am leaving you a few things.

First I leave you your great-grandfather’s weapons. He taught me how to shoot a pistol with his .38 Colt Army. I have not fired it since the day he died. I will give it a real good cleaning, and put the neat’s-foot oil to the holster, and leave it with the same loads that he put in the cylinder himself the last time he dropped the hammer. Also you will receive his .30/30 carbine and his 12-gauge Greener. No buck ever went very far that caught one of my dad’s .30/30s behind the foreshoulder. No goose kept flying very long that he centered with a load of 4s..

Next I leave you my old Browning five-shot 12-bore. I have used that gun so much it has been reblued and rebuilt twice. Also my scope-sighted Model 70 Winchester .30/06. Also my house gun, a .357 Magnum Smith & Wesson snub nose. A man who is not ready and able to defend his home does not belong in our family.

Also I leave you my 81/2-foot, 4-ounce Leonard rod, which is as good as the day it was built, and they do not build them any more. I leave you my 9-foot, 61/2-ounce Orvis light salmon rod, which has killed some good fish in Canada and Alaska and Ireland. You may fish some of the same pools with it. I leave you my favorite 8-foot, 31/2-ounce fly rod which Walt Powell made for me, and which can lay a No. 12 Spentwing Coachman on the water slicker than a schoolmarm’s leg. All these rods and guns will be cleaned and cased and tagged with your name for presentation with this letter.

More important, I am leaving you some memories. I hope that through the years they will be your memories, as they have been mine, as they are now your father’s, as they were your great-grandfather’s once.

I leave you the cold gray dawn and the marshes and the wind and the slap of wavelets and whistle of wings and the recoil of your gun against your shoulder.

The creak of packstraps in the dark and the thud of moccasins on the steep trail and the deep breathing as you and your hunting partner pack out your deer.

The easy grating of your canoe over a gravel bar and the shaking out of your line in the last long dusk and the sudden staccato scream of your reel.

The flutter and thump of a turkey gobbler coming down from his roost in that first light when you can count the eyelets of your boots.

The taste of a cold mountain spring as you lie on your belly with your mouth spitting cotton.

The smells that men like to remember-pipe smoke and boot dubbing and Hoppe’s No. 9, and fly dope on a red bandanna handkerchief, and the smell of leather that is more like a taste, and the before-breakfast smell of coffee and bacon frying, and the smell of a cottonmouth, the smell of fear, and the fall smells of sweet-fern and rotting apples and burnt powder in the frosty air.

I leave you a windy spring night and the shrill of peepers like sleigh bells and the far-off baying of geese heading north in the empty sky.

Swimming stripped in a clear lake under an August moon and then standing on the shore with a cigarette while the night wind dries your body and the loons call.

An afternoon in October and a bird-dog puppy staunch on his first point with one foreleg drawn up and his brown eyes fixed and his whole skinny body shivering with the strange new excitement of grouse.

A winter evening with the sleet against the window and a log blazing and a highball and some friends you have hunted and fished with to share your memories with you.

All these and more I leave to you, my beloved grandson. Perhaps I will live long enough to be at your side when they become your memories too. But if I do not, I raise my glass to you across the years.

The Lower Forty raises its glass to Parker Merrow across the years.