Two-man techniques for getting the venison. 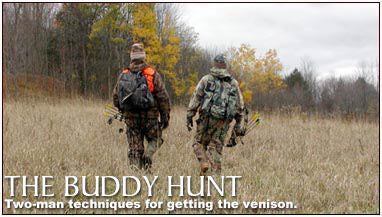 Many of us hunt deer with a buddy, and with good reason. As Mark Twain said, to get the full value of a joy-in this case the joy of a deer hunt-you must have somebody to divide it with. When your hunt is less than joyful, well, misery loves company. Freezing half to death in a tree, for example, is bearable when you know a good friend is freezing, too.

A buddy takes the edge off failure, sweetens success, and while he’ll rarely help you gut your deer, he will help you drag it. Just as important, a good bull session over eggs and hash at the diner can’t happen without a friend.

Yet, as much as we count on our hunting buddies to share the experience, we often forgo a golden opportunity. When the real hunting begins, buddies commonly say “Good luck!” and go their separate ways. Sure, there’s a certain gratification in taking a deer on your own, and there are times when you’ll want to hunt solo. But hunting together can improve the odds of tagging deer for both of you.

Stand Together
Despite the opinions of schoolyard bullies, four eyes can be better than two. Some hotspots just can’t be covered by one hunter. This is especially true during the rut, when it becomes all but impossible to predict the exact route bucks will travel through a given area. When you know a hotspot is hot but aren’t sure precisely where the deer will show, it can pay to stand together.

Several years ago, my friend Paulie and I started out hunting separate areas of a large piece of farmland. I sat at the edge of a narrow hidden field, and on the first morning, I listened to a buck steadily grunt as it walked just inside the woods on the opposite side. So I switched sides, and on the second morning, I heard the same thing-on the side where I’d been sitting the morning before.

The field was flanked on the north and south by long lanes of thick cedars, and the buck was using them as funnels of cover to travel west to east. Problem was, he was using them randomly, and I couldn’t watch both sides by myself. So Paulie joined me. On the third morning, I set up on the north side, Paulie set up off the southeast corner, and by 7:30, we had a 9-point loaded in the truck.

The same tactic can work in any number of places-both sides of an active field, ridge, swamp, or just a wide saddle or funnel. The following year, my friend Jo and I hunted a funnel of young birches and cedars. The area was a maze of deer trails, and we knew both bucks and does were moving through. But the funnel was too wide and thick for one person to watch. So we hung our stands about 80 yards apart; I watched the north half, Jo the south. Just after first light, a buck nearly walked within sight of Jo’s stand but then peeled off to the north. If we hadn’t set up together, neither of us would have tagged that deer.

A Little Push
There are times when all a friend needs is a little push in the right direction. When you and your buddy are stand-hunting separate areas in the morning, instead of meeting at the truck at midday make a plan for one of you to come down first and push toward the other’s stand. This is a fairly common procedure, but to be effective it has to be done carefully. It’s rarely enough to casually walk a straight line toward your buddy’s stand. Consider the wind, the cover, and the lay of the land, then plan a route that’s most apt to put a deer in front of your friend. Circling around an extra quarter mile is well worth it when you hear the shot and see your buddy beaming.

Also, it’s best to push toward the stand that is situated closer to good escape cover. One person can’t expect to steer deer into the open, but he can nudge them toward an area where they’ll feel reasonably secure. Two years ago, when my brother-in-law, Geoff, wanted to fill his doe tag, he set up in the morning at the edge of a swampy area in the middle of the biggest, thickest patch of wwoods on the property. He knew this was not only a good spot for deer to move toward in the morning to bed but also a place where deer would retreat if pushed by a friend. At midmorning, I got off my stand and pushed, and Geoff filled his tag.

Stand, Still
Buddies can also work together when using different hunting methods. If your friend wants to still-hunt and you want to stand, set up in a place where bumped deer are apt to go.

This tactic has to be thoughtfully planned. You need a funnel to help direct bumped deer toward your stand, and you need to set up so that neither your scent nor your approach will compromise your friend’s still-hunt. For example, say your buddy will still-hunt woodlot A, which is connected to woodlot B by a narrow strip of woods. Bumped deer are apt to funnel through that strip of woods to get to woodlot B. If you set up where the funnel meets woodlot B, you’ll be in a good place to see deer and out of your buddy’s way. Here, the patchy cover of farmland offers lots of opportunities. But even in the big woods and hill country, you can look for ravines, saddles, shelves, creek beds, and linear patches of thicker cover to funnel bumped deer.

Buddy Drives
Finally, even if you choose not to hunt together when deer are moving in the morning and evening, a variety of two-person drives can be very effective at midday. Just keep in mind that it’s best not to drive the same deer you’re trying to pattern for stand hunting. The key to two-person drives is to choose cover that is both isolated and small enough for two hunters to handle. It might be as simple as one hunter walking through an isolated patch of cattails while the other stands ready.

A zigzag drive involves each hunter alternately zigzagging toward each other. One hunter pushes for an agreed-upon time while the other posts, then vice versa. With a ravine drive, one hunter posts just inside the point of a ravine or finger, while the other zigzags toward him. A funnel drive simply calls for posting one hunter in a narrow funnel or saddle, while the other tries to move deer into the bottleneck. In the case of long, narrow strips of cover, such as a creek bed, a leapfrog drive has hunter A push toward hunter B. When they meet, hunter A circles farther down the creek bed and becomes the poster, hunter B drives toward him, and so on.

In hunting, as in life, a good friend is invaluable. So make the most of him.