To bring birds close without being seen, put some thought into picking your spots. 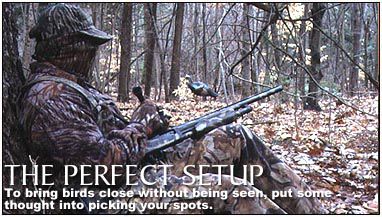 I t isn’t enough to sit down in the woods just anywhere, make turkey noises, and expect a gobbler to come running. How and where you set up for a bird often determines whether or not you bag it.

Setup basics are simple. Sit in front of a tree or rock that is higher than your head and wider than your shoulders. Having something big and solid behind you covers your back in case another hunter stalks the sound of your calls, and it hides your silhouette from incoming turkeys. Pick a comfortable place to sit; you may be there awhile. Take a second to clear out the branches and rocks at the base of your tree. I carry a ratchet clipper in my vest to prune any small branches in my way, and stick them in the ground in front of me to help hide my movements. Don’t overdo the hiding. It’s more important for you to be able to see than to be completely concealed. On a hunt in Missouri I was surprised to see my guide get down on all fours and crawl around, as if looking for a lost contact lens in the pitch-black darkness. “Whatever were you doing?” I asked him later, after we put my tag on a 25-pound gobbler. “I like to get down and see how everything will look from eye level when we sit down,” he explained. “If I don’t, the sun may come up and we’ll find we can’t see over the underbrush.”

** Shoulders and Shotguns**
If you can, pick a spot with a few big trees out front. Then, when the bird walks behind one of them, you’ll be able to make that last little bit of movement to get your gun in position. Before you sit, look around and establish range markers-rocks, trees, bushes-that you can use to determine when the turkey is in range. I find it’s easier to estimate range accurately while I’m standing up; everything looks farther away once I sit down. Sit with your off shoulder (the left for right-handed shooters) facing the direction you think the bird will approach. Putting yourself at a slight angle to the turkey allows you to comfortably move the gun in a wider arc to the right and the left. Finally, if you’re hunting with someone, make sure the shooter and the caller are together, and their eyes are at the same level. That way, both hunters have identical views, forestalling those hushed, frantic conversations that run: “Shoot him!” “I can’t see him!” “He’s right there!” “Where?” and so on, until the turkey wanders away.

Getting Close
The perfect setup takes advantage of a fold in the terrain, the crest of a hill, or a bend in a logging road that keeps you and the turkey out of sight of one another until the bird is close. Pick a place where the tom can’t see the source of the calling and has to come looking for you. Often, the best setups are such that you can’t see the bird until he’s in gun range. Why? For one thing, if the turkey can’t see you until it’s too late, he won’t spot your shaking hands and run away. Also, when a gobbler reaches a spot where he thinks the “hen” he is hearing can see him, one of two things often happens, both of them bad: Either he becomes suspicious and leaves if he can’t see her, or he hangs up and stands there displaying. If a turkey stops and struts 60 yards from your tree, all you can do is sit and watch the show. If, on the other hand, he’s 35 yards away, you can bring the curtain down. The exception to this rule is an open field set up with decoys. Decoys seem to draw field birds better if turkeys can see your plastic flock from a distance.

The best seat in the house gains you nothing if you’re set up too far away, too close, or somewhere the bird isn’t going. Try to sit between 100 and 200 yards from the bird. That puts you near enough to reduce the chance of another hen getting between you and the gobbler, while keeping you far enough away to avoid spooking him. Scouting and setting up go hand in hand; ideally, you’ve got an idea of which direction your bird wants to travel and you’ll sit down somewhere along his route. The sureest way to become a great caller is to be where the turkey already wants to go.

If you know the terrain very well, you can sometimes slip in much closer to a bird. For instance, if you’ve roosted a gobbler the night before and you know exactly which tree he’s perched in, you may be able to creep very quietly to within 50 yards of the bird before daylight. Turkeys will usually fly down to the short (uphill) side of a hill. Therefore, if you’re set up on the uphill side of his tree, he may almost land in gun range. One or two quiet calls will suffice to bring him all the way in. Needless to say, setting up so close to a turkey that he’ll pitch down virtually into your lap risks alerting the bird to your presence. To make this setup work, you need to get into the woods well before dawn, move quietly, and sit very still.

Breakable Rules
Columns such as this one invariably trot out two timeworn chestnuts of turkey hunting wisdom. First, you should set up at or above the turkey’s elevation. The belief persists that you can’t call turkeys downhill. You can. That said, most experienced hunters do prefer to be at least at the same elevation as the bird if not above him. Think of this as a rule of thumb.

Similarly, you’re supposed to set up so that there are no obstacles-fences, creeks, and so on-between you and the bird. It’s true, turkeys, like whitetails, prefer to follow the path of least resistance. The easier you make it for the tom to come to you, the better. But face it: Turkeys aren’t feeble. They can hop fences and creeks and run through brambles if they feel like it. If the only setup lies on the other side of an obstacle, give it a try. If the turkey wants to come, he will.

Rules of thumb have exceptions. I once set up on a gobbling turkey before dawn in a state recreational area open to hunting that I was visiting for the first time. As the sun rose, the sound of whirring cart motors and the snick of clubs on balls tipped me off that the wide flat between me and the gobbler was in fact the fairway of the local golf course. And no, I did not kill that bird. Turkeys can cross obstacles, but in a perfect setup, the turkey shouldn’t have to play through to reach you.