Missing occasionally is part of bowhunting. Missing often shouldn't be. 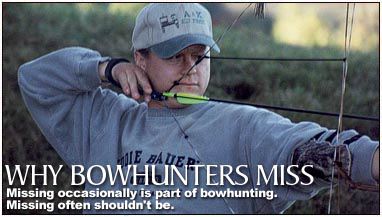 We can’t eliminate the occasional miss-it’s an inherent part of shooting a bow-but we should work hard to minimize misses. We owe that to the game we hunt.

Consider the story of my friend Phil, who went elk hunting with three pals. The elk were hot, and everyone got a shot. And everyone, save Phil, missed.

One hunter had recently switched from shooting with a finger tab to using a release. When his elk walked by, he drew and released-his fingers. Oops. The second guy, shooting from an awkward position, drew his bow and heard a clank as the arrow dropped off the rest. The third guy had no mechanical difficulties. He simply shot over four bulls. Phil, I must note, shot a nice bull at 15 yards with the same bow he’s used for 10 years.

A high miss rate on elk is not unusual. A slobbering bull generates enough adrenaline in a hunter to magnify the three common errors that cause us to miss: gear failure, form failure, and head failure.

Gear Failure
Most often, we screw up with a new piece of gear because we haven’t practiced with it enough. Take Phil’s friend who released his release. His mind had accepted a new way of loosing an arrow, but his muscles hadn’t. With a bull slobbering in front of him, his mind shut down and his muscles took over. If that new bow or sight or release calls you like a siren, buy it early and practice with it often.

Form Failure
Good bow shots share the same form because that form works-just as form works for golfers, basketball players, and bowlers. Have a friend videotape your form. Errors will jump out at you.

Next, practice your form under a variety of conditions: wearing all your hunting gear; shoo ting under, over, and through obstacles; shooting off your knees. If you will be hunting from a tree stand, practice from a tree stand. Phil’s second friend, whose arrow fell from his bow when he tried to shoot through an awkward window, would have had an elk if he had practiced shooting from odd positions.

Head Failure
Target panic, buck fever, call it what you will, we tend to tighten up when shooting at game. This causes us to make bad decisions-shooting at an unknown distance, for example, like Phil’s friend who shot over four bulls-and accentuates any little flaws we may have. The goal is to go on autopilot when your brain starts smoking.

My chant does two things: First, it displaces any disruptive thoughts, such as Look at the headgear. Second, my chant drills into my mind the three things I must do to hit. Full draw ensures good form and consistent arrow trajectory. Picking a spot forces me to focus on a 2-inch target in the middle of the kill zone. And following through guarantees I will hold my form until I see the arrow strike the target.