Want to get a great buck this fall? Your season begins now. 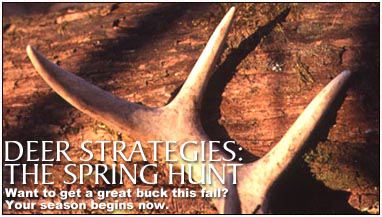 Like many other things I did when I was 21, I stumbled onto spring scouting completely by accident. It was a dreary, late-March afternoon, and tired of the blandness of city parks, I decided to exercise my dog in the deer woods.

That’s when I found the shed antlers. They were a matched set from a buck I’d hunted that fall, dropped no more than 30 yards apart on a remote hillside. The trail I was walking was a faint etching that ran 40 yards below, and was completely hidden from, the ridge-top paths I’d hunted that fall.

Two days later I went back, and in three hours of walking I learned why I didn’t get that buck-and how I could improve my chances.

Walking and Mapping
First I walked the trail where I’d found the sheds. It wasn’t peppered with rubs, but I found them, spaced along the trail like a series of exclamation marks. Frequently, when my faint path intersected with a heavily used route leading to a feeding area, I’d find an old scrape.

I searched for and found other trails. They were never very far from the thoroughfares used by does and fawns and young bucks, and they frequently joined or intersected those trails.

In the days ahead, I found and followed so many trails I had trouble remembering them all. So I bought an aerial photo of my hunting grounds from my local soil-conservation office and sketched the locations of every trail, rub, scrape, bed, and shed antler that I’d found. Marking my stand locations from the previous fall showed me I was missing the action just enough to remain ignorant-I was seeing bucks only during the rut, when they showed up in spots that normally held does and fawns.

So I went to work, sticking up a few platforms, brushing shooting lanes, and planning entry and exit routes. It was fun and eminently satisfying and nearly paid off in September, when I missed a huge 10-point from one of those stands. I completely shrugged off the miss six weeks later when I tagged a dandy buck from another of my spring setups.

Trick Sheds and Tease Trails
Over the years, I’ve learned that not every piece of sign I find each spring will help me next fall. Shed antlers, for example, tell you that a buck has survived the hunting season. But is it a deer you can expect to hunt? I’m not so hopeful if I find the shed on a winter food source such as a field of standing corn or soybeans; the buck could have traveled far from his home range to winter near easy groceries. There’s more promise to an antler found near a known bedding area.

Some trails are also teasers. Paths leading to feeding areas can be seasonal, laid down to take advantage of last fall’s forage. Better to focus on trails that deer use to get from point A to point B: routes that cross a steep ditch, follow a bench on a hillside, or parallel a brushy fenceline connecting two blocks of timber. Finding buck sign is your winning ticket, most of the time. Field-edge scrapes are easily found, but they are notorious night sign. Scrapes in wooded cover-on logging roads, ridge tops, and saddles-will often be reopened each fall.

Rubs remain the drop-dead killer spoor of all. I scouted a new property last March and found a rub line on thigh-thick cedar trees that looked like a connect-the-dots puzzle. I saw that buck once in the fall-just out of bow range, his 8-point rack high, dark, and heavy-and I’m still hunting him as I write this.