You may not like us, but we're paying for your deer. 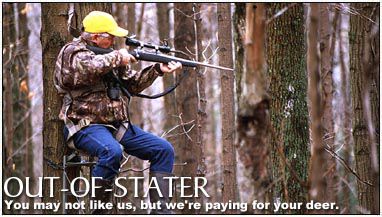 I had always heard that jealousy is a green-eyed devil, but this time the eyes were ice-water blue and narrowed. They followed me out of the sporting-goods shop, where someone had casually asked whose buck that was in the truck outside. “Mine,” I’d said. “Got it this morning, up on the ridge.”

My accent wasn’t anything like the person’s who had asked or the other folks’ in the store. As the door closed behind me, I caught the low growl that came from under the eyes. Damned out-of-stater is the cleaned-up version.

I paused on the porch, feeling my face getting red, but it wasn’t worth going back inside for. The comment wasn’t personal. It was aimed at the generic nonresident hunter. Besides, I’d heard-and even felt-that same sentiment back home, when someone from across the state line had taken the local trophy and then spirited it away to wherever he came from. I didn’t deserve to throw any stones.

Now, more than ever, sportsmen don’t stay “where they belong,” that is, hunting and fishing in their own backyards. We have lost a lot of our out-the-back-door sporting opportunities because rural lands are being gobbled up for malls, highways, and housing developments. Some of us now have discretionary income to take trips far from home to try our luck in another setting. These are great adventures to us, and we expect to find new things when we travel to hunt and fish. However, sometimes we’re surprised and hurt when we encounter nonresident prejudice-the attitude that it’s just not right when someone from out-of-state gets a trophy that could have gone to a local.

Those whose mail goes to the same two-letter postal code share a we-are-family feeling toward each other. Anyone who doesn’t live within those political boundaries is a literal outsider. Blood ties are the strongest, and land ties come next. We tend to have a possessive outlook on anything that is in our state: our ball teams, our landmarks, our wildlife. It’s illogical but true.

Pinning down a sensible reason to back up gut resentment against nonresident sportsmen is difficult. It seems adolescent when we try to explain our partisan feeling toward in-state sport and wildlife. So we drop our eyes, kick a toe in the dirt, and say, “Well, gee, we pay for it.”

My home-state wildlife agency is financed by license dollars and doesn’t receive any general-fund monies for operation. Hunters do pay for conservation. But who pays the most? The hunters who live here pay much less individually for wildlife programs than the out-of-staters. Consequently, each nonresident hunter is paying more than each resident sportsman to fund our state wildlife programs.

I suddenly became unpopular when I mentioned this mathematical fact to my local-area hunters. I suggested for argument’s sake that the nonresident deserved more say in how our state’s wildlife is managed. The nonresident’s voice has the most hunting-license money behind it, so his opinion should be worth the value of five resident hunters in my state. In other states, the value is 10 times or more. I challenged my fellow resident hunters to show me where they have done more, on a one-person basis, to fund wildlife than the nonresident. They sputtered and protested but couldn’t respond. The numbers don’t lie.

In some states, wildlife management programs are funded by both sportsmen’s dollars and by state-budget monies. Therefore, the residents can counter that the taxes they pay add to their hunting fees to support wildlife. Even so, I’d be surprised if the total fees and taxes per capita that go to wildlife conservation equal what nonresidents pay for licenses and permits for the privilege of hunting there.

In a neighboring state to my own, the least I can pay to hunt as a nonresident for big and small game-during firearm, muzzleloader, and archery seasons-is $275. Residents get all that for $44. Withh residents getting the “easy ride” and nonresidents having to pay so much to hunt, hard feelings are predictable. Such one-sidedness has been a historic cause of turmoil, in arenas a lot larger than hunting and fishing. It’s been the stuff of war. We are sportsmen, though, in the fair-play definition of the word, and we tend to live up to the honorable expectation.

Yet I couldn’t stop my own bitter, in-state feelings when an unknown out-of-stater shot the township’s biggest buck, a deer that all of us had watched grow and feed on our land since it was a stumbling fawn. I could only explain to the emerald-eyed demon inside me what my better sense knew was true-that buck was anyone’s fair game, no matter where the lucky hunter called home.

Visiting hunters can counter residents’ prejudice with a jealousy of their own. When I’m hunting in another state, I’m envious of the in-staters who hunt there so cheaply and so often, maybe every day. I can’t come back next week when, they tell me, “the hunting gets good.” I can’t afford it, can’t take off work, and it’s too far to drive. Because I might be on a rare or even once-in-a-lifetime outing, I hunt hard when I go out-of-state. I expect my effort, the short nights and long days, the blisters, splinters, sweat and bone-chill, to be ample payment for the buck I take home. Whatever our address, to the game we’re all the same.