Three turkey hunting masters debate the perennial question, should you stay or should you go? 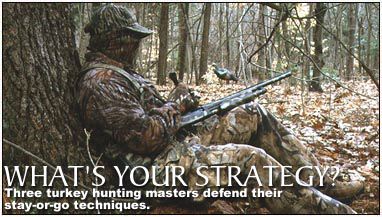 Back in the days when turkeys were scarce, if you found a gobbling bird, you moved in with him for the better part of the spring. Each morning you’d locate your turkey on the roost, sit nearby, yelp three times, and wait. If he didn’t cooperate, you went home and tried again the next day. Such a hunt could last days, weeks, even years.

Turkey restoration brought the birds back in greater numbers across the country, freeing hunters from commitment to a single tom. They could move through the woods calling every hundred yards or so, looking for the one turkey in a hundred that would come running to a fevered yelp or an excited cutt.

We have now reached a point in our history where we have approximately 2.4 turkeys behind every tree, and both hunting styles have their proponents. Which is best: sit and wait or run and gun? It depends on whom you ask and where you hunt.

1.****Wait Them Out
Allen Jenkins of Lynch Worldwide call makers in Liberty, Mississippi, typifies the old school. A disciple of M.L. Lynch, one of the founding fathers of modern turkey calling, Jenkins began learning from the master at the age of 13. “Mr. Lynch taught me patience. There weren’t very many turkeys, and if you moved around and ran a bird off, the hunt was over,” he says. He still believes a low-impact approach works best. “There are a lot of birds today, but people don’t realize that from the time they’re in the egg, something is trying to eat them. A bird that has seen his companions killed is tough to hunt.” Jenkins prefers to scout a 3-, 4-, or 5-year-old gobbler, slip quietly into the woods, and lay siege to him.

“I’ll clip a few branches and stick them in the ground in front of me, or I’ll bring a little blind to the woods,” he says. “I’ll also carry several box calls, so I can vary my sound from one day to the next.”

Once he’s set up, Jenkins waits. He knows Eastern gobblers often won’t go far in his part of the Deep South. “Birds will stay in areas as small as 40 acres if there’s food and water available. The gobbler doesn’t need food but the hens do, and they’ll lead him around. I’ll wait for the hens to feed my way and bring the gobbler with them. Some days, I won’t call for three or four hours because I know I’ll be wasting my time.”

Although he’s seen southern turkey populations explode, Jenkins remains committed to sitting still and waiting out one bird over the long haul. What is the most time he’s ever spent with one turkey? “Five years,” he answers immediately. “I hunted one bird with a crooked toe. One of his footprints looked like an armadillo track. After I kill a bird like that, I go into a depression because I don’t have him to hunt anymore.”

“Marvin taught my brother and me the old style, but Terry and I are impatient people,” says Drury. “We prefer to make something happen.

“I compare run-and-gun hunting to fishing. If you cast once and reel in, how many fish will see your lure? If you cast 1,000 times, you have a better chance. With as many turkeys as we have now, birds don’t gobble as much later in the day. You have to cover ground to find a bird that wants to work.

“My Â¿Â¿Â¿lure’ is a high-frequency friction call, either a slate or a box,” Drury continues. “I start softly, in case there’s a bird nearby, and then I increase the volume until I’m putting everything I have into it.”

He believes successful run-and-gun hunting depends on the weather and the gobbling cycle. “I think the best times to be out are right before a storm front, and on the clear, high-pressure days after a storm passes.

Mobile turkey hunting requires lots of land. If Drury can’t get on a turkey early in the morning, he’ll cruise large public areas, trying to strike a bird. Or he’ll go to breakfast. “We’ll go to the cafe and tell people we’re not having any luck,” he says. “They’ll say, Â¿Â¿Â¿Come try my turkeys.’ If you can get permission to hunt several small farms, you can make a circuit and hit all of them in a morning.”

3****Do Both
Missouri’s Ray Eye knows a lot about both styles: He helped pioneer run-and-gun turkey hunting in the 1970s and popularized hunting from blinds in the 1990s. “I was one of the first to go to gobbling turkeys,” he recalls. “The old-school hunters condemned me for it.” However, Eye says he never cared for the term run and gun. “You don’t run,” he says. “You have to use your woodsmanship. I think of it as gaining ground, getting into a better position to call. You can’t skylight yourself or make a lot of noise. You’ll shut birds up.”

Eye believes the decision to run and gun or sit and wait depends on the terrain and turkey numbers. When he moved his turkey camp from the timbered ridges of the Ozarks to northern Missouri’s turkey-rich farm country, Eye changed tactics.

“In southern Missouri it’s easy to move a few hundred yards between calling sites and remain unseen because the Ozarks are so heavily wooded. The birds are so spread out, you have to move to locate turkeys. It’s not unusual for a bird to fly down and walk 3 or 4 miles, gobbling and looking for hens,” he explains. “In northern Missouri the terrain is much more open and there are so many turkeys the toms aren’t as vocal, and they don’t have to go far to find a hen.” Eye scouted his Missouri lease, built several blinds on the property, and instructed his guests to sit tight and call sparingly.

Eye drops his guests at their blinds well before daylight and tells them to sneak out quietly. Unspooked by human interference, the turkeys gobble all spring, long after run-and-gun pressure has quieted his neighbors’ birds. “Turkeys don’t become call-shy. They become people-shy,” Eye likes to say.

“Our success rates on the Missouri farm skyrocketed. People started calling me a blind hunter as if it were a bad thing. I asked them, why will you sit in a tree for weeks to shoot a deer, but you won’t sit and wait for a turkey?”

Run and gun or sit and wait? “I hunt both ways, depending on terrain,” Eye answers. “If the end result is an exciting hunt and a dead turkey, what does it matter if you went to him or he came to you?”