The furious measures of a late-season turkey hunter. >>PART 3 of 3 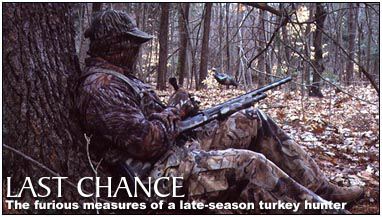 With only four days to go, I still hadn’t filled my second tag. It had been so long since I’d heard a turkey gobble-much less worked one-that it seemed to have happened in another season, or even another life. Every morning, it was the same drill: Get up at 3:30 or a quarter to four. Hike into the woods and set up before daylight. Call and listen. Hear nothing. Stand up, walk, and call. Strain futilely to hear something. Go to work and try not to fall asleep at the desk. It had degenerated into a dull routine. Even so, when I found out I was going to have to miss two of the last four days, I took it hard.

“A business trip, can you believe that?” I raged on the turkey hotline. “Meetings all day. Then you stand around with one of those whiskey drinks, trying to remember people’s names. And why now?”

“Well, quiet as it’s been,” Tony said, “you probably won’t miss anything.”

“You watch. Tomorrow, for sure, they gobble. With me on my way to New York.”

“Yeah. Thank God for that.”

I spent the day fuming and trying to figure out some way I could get in just a few minutes at daylight before I had to leave for the airport. I thought I could zip a pair of overalls over my traveling clothes, drive fast once I got out of the woods, and shuck the bibs when I hit the airport. I could get maybe 30 minutes of hunting that way, and I was set to do it-was in the grip of the madness that tightly-when I wondered, What if I actually shoot a turkey? There was no way I could do the paperwork at the reporting station in time, and what about the bird? I couldn’t leave it in the truck for 48 hours.

I thought about using some kind of refrigeration. Maybe Tony, who owned every toy known to man, had one of those little refrigerators you can plug into a cigarette lighter in your truck. I could leave the motor running-or, screw it, let the battery run down and get a jump when I got back in two days. Put it on the expense account. It’d serve them right for scheduling a meeting during the last week of turkey season. I took a breath, which is sometimes the best way to hold off the madness. There is no way around it, I thought, with a heavy feeling of resignation. I was going to miss half of the remaining turkey season.

** Imprisoned**
The meeting was all flip charts and laser pointers and discussion groups and goals, and the time passed more slowly than it does, I imagine, in prison. I diverted myself by recalling some of the better and more audacious moments I’d had in the turkey woods.

There was the time I called to a bird that came back at me once or twice, then flew down and landed in the top of a tree about 100 yards away. I could see him. The question was, could he see me? I made a soft call on a mouth yelper, and he responded right back. I couldn’t hear any real hens in the area and decided to go silent. I felt sure he was looking for the silhouette of a hen on the ground, and the more I called, the better he’d be able to pinpoint my location. I was camouflaged but not invisible.

After about 10 minutes, the gobbler suddenly flew down off the roost-straight at me. I thought he was going to land in my lap, all 20 pounds of him. When he hit the ground, he wasn’t five steps away and he made me instantly. We had a Wile E. CoyoteÂ¿Â¿Â¿Road Runner moment, and then he was hauling. I was a little rattled, myself, but I got the shot off and picked up the bird less than 20 feet from where I’d been sitting. The meetings and discussion groups went on for two days. The cocktail party at the end, when business was done, featured the usual inconsequential and insincere conversations. Dinner was slow getting started. Then it dragged on like a close election. There were speeches that nobody would remember, not even the people who gave them. It was late when I got back to my room.