Have fears of CWD caused a drop in license sales? 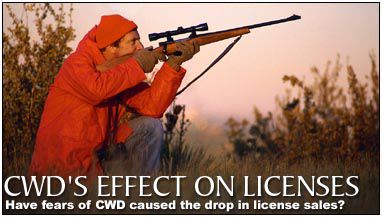 Fears over the possible risk of chronic wasting disease to human health may have caused the 10 percent drop in hunting license sales in Wisconsin-from 688,540 in 2001 to 618,945 in 2002-where CWD was found in free-roaming deer last spring. But license sales were up by about 30,000 in Colorado, where CWD was first discovered decades ago. Wyoming, Nebraska, South Dakota, New Mexico, and Illinois, the only other states where CWD has been found in wild deer and elk, showed no decline in license sales.

“Wisconsin hunters are very concerned about the long-term impact of the disease on hunting,” says Wisconsin wildlife management director Tom Hauge. “For some, the enjoyment has been taken out of hunting.”

By contrast, Todd Malmsbury, chief of information for the Colorado Division of Wildlife, says, “Licenses that are available in areas where CWD has been found sell very quickly. And it appears statewide elk license sales for 2002 will be up in the tens of thousands over last year.” Malmsbury says hunters in Colorado have had time to develop an understanding of the disease.

“We’ve lived with CWD for a while,” says Bob Lanka, wildlife management coordinator in Wyoming. “There’s no sense that the sky is falling. But I would like to have conclusive proof that CWD isn’t passed to humans through venison.” To date, there is no evidence that eating the meat of deer or elk infected with CWD can cause a similar brain-wasting disease in humans.