The future of hunting: Marksmanship exams for bowhunters. 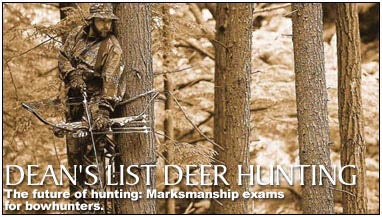 Three years ago, Bill Badgley, a 52-year-old bowhunter and seed-company nutritionist in Cambridge, New York, noticed many of his customers closing off their lands because of bad experiences with hunters.

“The landowners would complain about deer damage, but they posted their land,” Badgley says. “I asked them, Â¿Â¿Â¿What if I could find ethical, proficient hunters to help you?'”

To pass the partnership’s proficiency test, bowhunters must choose which three of five McKenzie deer targets grant ethical shots and put an arrow into the kill zone of each. Gun hunters must make lung shots on deer cutouts at 50, 75, and 100 yards. The passing rate stands at just 50 percent for bowhunters, about 85 percent for gun hunters. “The test has to be hard,” Badgley says. “We tell landowners we’re sending them experts.”

Interested? “We only enroll hunters who’ve been recommended by members,” he says. “But I tell people, don’t worry, this is the future of deer hunting.”