The stealthy feline is having a population boom. 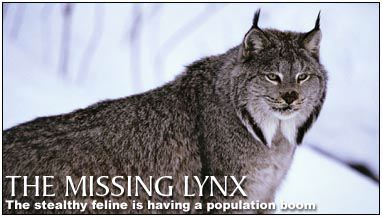 In 1996, the Minnesota Department of Natural Resources declared that the Canada lynx was no longer a permanent resident of the state. And in March 2000, the lynx was listed as “threatened” under the Endangered Species Act. But the stealthy feline may be back. Over half of approximately 140 reported lynx sightings in Minnesota in the last two years, including a videotaped encounter of a female lynx and her kitten as well as several photographs, have been verified.

The encounters have renewed hope that lynxes-a once vital, though always mysterious predator-will maintain their presence in the North Woods. Though biologists never knew exactly how many lynxes lived in Minnesota, an annual trapping season was held until 1983, when the harvest indicated a population crash and the season was closed. Lynx sightings remained rare throughout the 1990s and were largely attributed to animals wandering in from Canada when populations of snowshoe hares (their primary prey) were low. Biologists intend to take advantage of the current boom in lynx numbers (estimates place the population at over two dozen animals) to begin a three-year telemetry study tracking their movements and behaviors.