Thriving wildlife populations take a bite out of farmer's wallets. 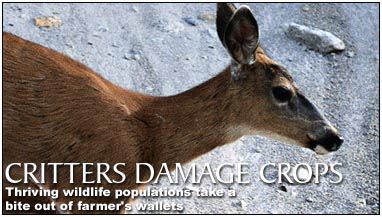 Thriving wildlife populations are good news for hunters, but they can take a big bite out of farmers’ wallets. Crop and livestock losses from wildlife total nearly $1 billion a year nationwide, according to a recent survey by the U.S. Department of Agriculture.

The greatest culprit is the whitetail deer, whose population has soared from 500,000 a century ago to almost 20 million today.

Wildlife biologist and risk analyst Alice Wywialowski, of the USDA’s Animal and Plant Health Inspection Service, helped design the survey and said that it is clear that partnerships between hunters and farmers are key to lessening crop and livestock damage. “The deer populations have gone through the roof, and the more that hunters are allowed to harvest deer, the more deer populations and the damage they cause will be reduced.”