It's more about awe and respect than ego. 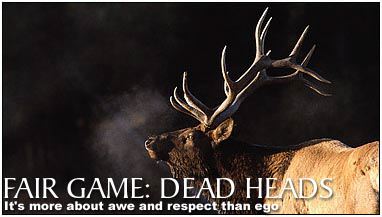 In Greek, taxidermy means “arrangement of skin,” but Leonard Franklin Slye probably knew the true meaning. Slye, a.k.a. Roy Rogers, said, “When I pass away just skin me and put me on Trigger”-who was already stuffed for eternity-“and I’ll be happy,” to which Dale Evans reportedly replied, “Now don’t get any ideas about me.”

Almost nothing we do as hunters strikes outsiders as quite so off the wall as taxidermy. Beyond visceral reaction, the current intellectual view of taxidermy is stated by Stephen T. Asma in his book Stuffed Animals and Pickled Heads: The Culture and Evolution of Natural History Museums: Mounted trophies represent nothing less than “unapologetic reminders that the hunter is master,” which is certainly one apparent, if thoroughly tedious, explanation.

Whatever our motives, we are by no means the first to fall under the spell of taxidermy. Far older, far more politically correct peoples, such as Native Americans, kept the skins of their kills for an assortment of reasons, not all utilitarian. Along with mummifying pharaohs, Egyptian embalmers preserved dogs and cats to accompany the various Tuts on their celestial voyages. The oldest known taxidermied animal still in existence, according to Christopher Frost in_ A History of British Taxidermy_, is a 400-year-old rhinoceros in the Royal Museum of Vertebrates in Florence. An African gray parrot that pined away in 1702 shortly after the death of its mistress, the Duchess of Richmond, perches today in England’s Westminster Abbey Museum.

Wealthy Victorians popularized the mounting of exotic big-game trophies from the empire’s farther reaches. Their taxidermist was Rowland Ward Ltd. of Piccadilly, noted for “Wardian furniture,” such as tiger-skin chairs and the always genteel elephant-foot liqueur chest.

Nineteenth-century American hunters had far greater access to big game than all but the richest British sportsmen of the era. But for most Americans game meant provender alone. Taxidermy was practiced, and in the early 1900s there were even famous names, such as Jonas Brothers. Most taxidermy, though, was performed in somebody’s basement or barn, with the result likely to resemble a case of hyperthyroidism coupled with Botox overdose.

For American hunters today, big game does more than provide nourishment. Big-game hunting, with its particular emphasis on trophies, continues to be the strongest sector of hunting activity, with at least twice as many people hunting big game as there are hunting small game or birds. New Method Fur Dressing, probably the largest tannery of many in the United States, processes upward of 100,000 wild animal skins per year.

American hunters now want to see those tanned skins mounted as artfully as possible. In the upper echelons of taxidermy collecting, the latest trend is not just toward the faithful re-creation of the animal but its habitat as well. A new “environmental trophy room” can cost $1 million, without the animals, and include everything from faux mountains, savannas, and forests to programmed lighting to replicate sunrise and sunset and the stars above at night.

The best venue to glimpse this lofty realm of taxidermy collecting is at the Safari Club International convention, held last January in Reno-and anyone with even a latent interest in taxidermied animals owes himself a visit at least once. He’ll see enough mounted lions, bears, sheep, and species too obscure to name, to raise the average vegan’s blood pressure to stroke level. Many of them are true works of art, done for fabulous prices.

Having a look around at SCI, you might indeed wonder what motive lurks behind the urge to go out and hunt animals and keep them as works of taxidermy. If it is solely seen as a decorative art, then no matter how technically magnificent the presentation, it can only be a ghastly display. And if it is just about ego, then relief for that cann be found much more conveniently in certain little blue pills. To have any legitimacy, taxidermy must represent something more, and of course, it does.

This is probably where I should confess that I have been a taxidermy junkie since walking into a neighbor’s trophy-hung den at age 4 and wondering where such wonderful things came from. (On the other hand, one of the darker moments of my life occurred when I paid a return visit after many years to the British Natural History Museum, specifically to wallow once more among all the marvelously bizarre mounted animals, only to discover that they had been replaced by vapid but oh-so-modern audiovisual “interactive” displays: Damn the evolutionary time line; give me back the taxidermied thylacine!)

The only reason there is any open space left on my own walls is primarily due to finances, logistics, and errant marksmanship. We eat the flesh of the animals we hunt, and that is natural and reverent. Why should preserving an animal’s head or body be any less so, especially if we maintain it in a place of honor in our homes and in our lives? What else should we do with all those wonderful things? As hunters, we pursue game not to feel mastery but because of the sense of awe and respect we experience in the presence of wild animals, and taxidermy appeals to us because it recalls, and prolongs, that sense. To put it simply, it triggers something in us.