Clothing counts, but hunting skills are what keep you hidden. 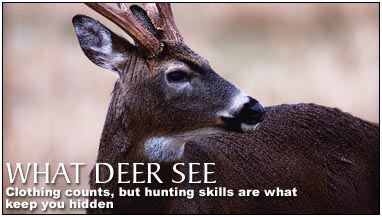 If you understand how deer look at the world, you can avoid the simple mistakes that send bucks running. For decades hunters believed that deer saw in black and white, but scientists have dissected every aspect of a deer’s life, and it turns out a deer’s universe doesn’t resemble old Wyatt Earp reruns.

Light and Color
Mammal eyes contain two different types of cells that receive light: rods and cones. Rods are sensitive to low light but don’t register colors. Cones pick up color in daylight. Human eyes contain more cones, so we distinguish color well. Because we have relatively few rods, however, our night vision is limited. Deer eyes are heavy on rods and light on cones, so whitetails and muleys move easily in the dark. Recent research also shows that deer see some colors fairly well.

“Color” is how we perceive light of various wavelengths and frequencies, making up the visible spectrum, what we see in a rainbow. On one end of the spectrum is red, with the longest wavelengths apparent to the human eye; at the other end is violet, with the shortest.

However, other light wavelengths exist. Just as human ears can’t hear some sounds, human eyes can’t see some light. These invisible wavelengths include ultraviolet (beyond violet) and infrared (below red). Deer sense colors toward the violet end of the spectrum, so they can see blues and probably even ultraviolet (UV) light. Deer show a slight sensitivity to yellow, but tests indicate that green, orange, and red appear to them as shades of gray.

Sound Science or Good Marketing?
Exactly how well deer see UV light is debatable. Clothing can contain UV brighteners, additives incorporated in some fabrics and detergents that supposedly make the clothes appear brighter. According to one theory, such clothing makes hunters glow in the dark to a deer’s eyes. A company that made a UV-killing detergent attempted to prove this with a video showing hunters wandering around after dark, wearing either UV-brightened or non-UV camouflage. Under a black light the former glowed, whereas the latter almost disappeared.

There are problems with this so-called evidence. Video cameras and human eyes don’t see the way deer do, and hunters don’t hunt at night under black lights.

For years most hunters I know (including me) unwittingly wore UV-brightened fabric. We never spooked deer unless we did something stupid, like move. From this empirical evidence, I’ll go out on a limb and say that a deer’s UV sensitivity is pretty low. If you’re the type that leaves nothing to chance, go ahead and buy UV-free clothing and detergents, but I wouldn’t bet the hunting season on them.

Predator and Prey
As with most prey species, a deer’s wide-set eyes lie on either side of its head. Consequently deer can see almost 90 percent of the world around them and pick up movement that humans and other predators, with close-set eyes at the front of the head, cannot. However, deer only have binocular (two-eyed) vision in a very narrow arc directly in front of their noses. If we sit still, deer generally perceive us as just another lump in the landscape.

I hunt a lot from ground blinds. Dozens of deer have walked up and started browsing only a few feet away, even when I was dressed in less than ideal clothing, like a solid hunter-orange sweatshirt and blue jeans. The sweatshirt’s “pale gray” was broken up by a few branches, and my blue jeans were hidden by tall grass. I’ve also rattled in bucks to less than 50 yards, with the deer looking directly at me with both eyes. As long as I do my best statue act, they keep coming.