Yes, you can beat the mountain this season. But you first have to get off the couch and drop the bacon sandwich. 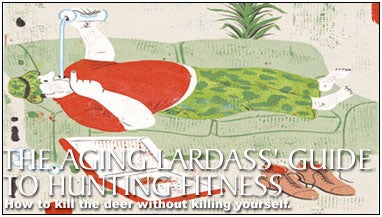 You’ve seen them on television as you stare over the third-trimester bulge of your stomach, a beer in one hand and a bag of Doritos in the other. They are people in their 40s and 50s, racing through the surf or bounding through the woods, their faces wreathed in smiles, their rock-hard bodies working like machines. No sweat drips from their foreheads. Their chests do not heave with strain.

These people are not normal, any more than women who look like Halle Berry are normal. Real middle-aged people sweat, shuffle, limp, gasp for air, and often have hunts ruined, or take a dirt nap, because they can’t hack it.

And therein lies the irony: As hunters get to the age where they can finally afford the really good hunts, they are often too out of shape to go on them. But that need not be, and maybe some of what follows will be useful this fall. Bear in mind that I’m not a doctor; otherwise you’d be paying a lot more for this advice. If you’re reading this then presumably you’re not dead yet. You still have a chance, if you follow my three-point plan:

I. Be Realistic If you’re past 40, weigh too much, and work a desk job, it’s very unwise to book a hunt on which a lot will be asked of you physically. If you do, you’ll need a minimum of two months and a maximum of six to prepare before you can manage it. Even if you’re only hunting locally, you’re going to huff and puff your way back to your truck.

The worst part of going on a hunt when you’re out of shape is the humiliation you may suffer. Many years ago I hunted in Botswana’s Kalahari Desert. Walking in the Kalahari is a tough proposition. It’s all sand, the elevation is 4,000 feet, and the air temperature is often above 100 degrees.

One of our party was in his early 40s and grossly overweight. When asked to get out of our Toyota and do some walking, he managed to go 100 yards before collapsing. “I can’t go on,” he moaned.

Our professional hunter, Ian Manning, walked over to his supine form, which resembled a colossal mound of agitated Jell-O, and said:

“Tom, you simply must get up.”

“Tom, you are too heavy for us to carry unless we gut you.”

“Tom, what would your wife think of you if she could see you like this?”

Tom finally lurched to his feet, downed the contents of an entire sisal water bag, and staggered back to the truck.

He was never the same after that. His wife left him, he was committed to an institution, and he died while still in middle age. I think about him whenever I want to eat a whole pizza with extra cheese.

I once hunted caribou with a man in his early 50s who was huge and could not take walking on tundra for eight hours a day. When our Zodiac boat beached back at camp, he stood up to wade ashore, but his overworked legs gave way and he toppled into the ice-cold lake. I thought it was hysterically funny. He didn’t.

Years ago in Montana a friend and I agreed to let a couple of brothers from Michigan’s Upper Peninsula, where it is flat, follow us up the Cottonwood-Hyalite divide, outside of Bozeman, Montana, where it is not flat. The brothers had looked forward to this trip for years, but between them, they weighed as much as a tractor. After 1/4 mile, their faces were an attractive purple. I never got to see what color they would be at the 1/2-mile mark because the pair went back down the ridge, got in their car, and drove back to Michigan.

II. Get Healthier First, see a doctor to find out what your heart is up to. The doc will give you a stress test, which means you walk on a treadmill with a bunch of electrodes pasted to you. Stress tests are not a 100 percent guarantee that your ticker is okay, but short of cutting your chest open to take a look, it’s the best thing we have.

The alternative is what happened to bestselling-jogging-guru andd fitness-pain-in-the-neck Jim Fixx, who dropped dead in 1984 as he was trotting along a road in Vermont. An autopsy showed that three of the arteries leading from his heart were almost completely blocked and that he’d already suffered three heart attacks. If he’d had a checkup, he’d still be nagging us.

Second, lose weight. Lose all the weight you possibly can. If you can get to the point where people burst into tears when they see you, you’ve done well.

Third, exercise, but do not jog. Jogging will get your heart and lungs in superb shape even as it destroys your feet, knees, hips, and lower back. Ride a bicycle or climb stairs. This is not only low impact but because of the leg lifting and pushing involved will actually do a much better job of conditioning you for hunting than will jogging. I recommend joining a gym. That way, you can sweat while admiring all the hotties on the adjoining machines to whom you are, let me assure you, invisible.

Exercise your stomach and lower back because you’ll probably be lifting duffel bags and (if you’re lucky) dead animals, and a wrenched back in the boondocks is big trouble. Lifting weights is fine, but warm up first and don’t get crazy about it or you’ll tear your tendons. What you’re after is the ability to work pretty hard for a long period of time, so train for endurance above all.

III. Don’t Be a Hero Have a heart-to-heart (pun intended) talk with your guide. Remind him that dead men pay no tips. If you’re hunting with friends or by yourself, don’t put yourself in a situation where you will tempt the Reaper. If you kill a deer, gut it, leave it, and get help dragging it. The deer will wait for you. And don’t load yourself down with equipment because you’ll suffer for every ounce you carry.

When it comes to setting a pace, you can’t be expected to run up mountains, but you are going to have to climb those mountains steadily or else go home empty-handed. A hunter who has to stop and gasp for breath every few minutes will get no sympathy from anyone.

As you read this it is late summer. All over this great land, middle-aged lardasses are enjoying the good life, demolishing six-packs and tucking away whole racks of ribs. I am living on designer water and diet tuna and sweating in the gym, admiring the babes on the other step machines who go three times as fast as I can while they’re still warming up.

I ask: Why do I kill myself like this?

And the answer comes: So I don’t kill myself.