Deaden the noise to become a deadlier hunter. 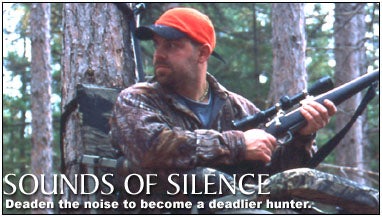 If your bow scrapes, squeaks, or creaks when drawn, it instantly rivets a whitetail’s ears and eyes in your direction. Just as troublesome is a bow that whacks, rattles, or twangs on release, which causes a deer to duck reflexively; the arrow either zips over its back or hits high. Silencing your bow is just as important as fine-tuning it to shoot accurately. Eliminate bow noise with the following tips to ensure deadly silence.

String Silencers
Dampen string twang by attaching silencers to the bow’s string or cable 10 to 12 inches from the end of each limb. Yarn puffs, fleece strips, and rubber whiskers are among the most popular. I prefer the last because they don’t collect burrs or hold water when it rains.

Brush Buttons
Slip a pair of brush buttons onto the string of a recurve bow and snug them up against the upper and lower bow limbs. They’ll deaden string slap and prevent twigs from catching between the string and the limb, an especially irksome and noisy bugaboo.

Arrow Rests
An arrow scraping across a bare metal rest on a compound bow can alert deer. A number of companies offer materials that cover and mute those metal prongs, such as shrink tubes, Teflon tapes, plastic-coated launchers, moleskin, and more.

Worn leather arrow rests and side plates on recurves and longbows eventually must be replaced. When they become too thin, they allow the arrow to brush against the bow, which can cause deer to flinch at the shot.

Quiet Quivers
Stifle a rattling quiver by placing a rubber spacer between the quiver’s mount and the bow to provide more space between them. If the material inside the quiver’s cap no longer holds arrows fast, replace it. Arrows should be inserted so that their fletchings fan away from each other to prevent contact.

Soft Touch
Man-made materials in compound bows sound off audibly when bumped against hard objects. Cover the most offensive areas with adhesive camo felt or rubber designed expressly for this purpose. The most crucial location is beneath the arrow rest. Should the arrow inadvertently fall off during the draw, the soft material muffles the sound.

Hush Cables
Insufficient tension, misaligned wheels, and cables that hit each other may cause noise that can spook deer. A slide between the cables and cable guide may do the trick. If not, consult a bow shop to rectify the problem.