It's not too early to imitate a buck. 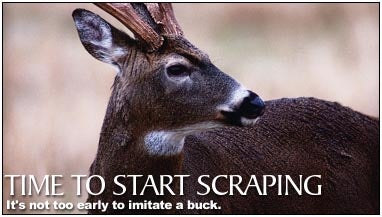 It’s only August, but expert bowhunter Sam Collora is already moving dirt in the deer woods. The idea behind preseason mock scrapes, he says, is to start a scent-marking match that lasts into the season.

“Early-season scrapes are territorial,” Collora says. “By making a mock scrape, you’re introducing a new buck to the area and creating competition.” He has watched as many as seven different bucks visit a mock setup in a single evening. Here are his tips:

(1) Start as early as late July or August.

(3) Situate the scrape beneath a branch overhanging the ground by 5 feet or so-and within shooting distance of a good stand location.

(5) Using a machete or trowel, dig up a 2- to 3-foot oval area beneath the overhanging branch and scrape the dirt off to one side.

(6) Lay a piece of crumpled wax paper on the bare dirt. (The paper keeps the scrape fresh by preventing applied scent from leaching into the soil.) Place dirt back over the paper.

(7) Apply 1 ounce of quality buck urine to the scrape and overhanging branch.

(8) Use the machete to rub the bark off a nearby sapling or two. This mock rub may attract bucks that pass upwind.

(9) Freshen the scrape once a week during midday hours when deer are bedded.