When deer hit white oaks, where will you be? 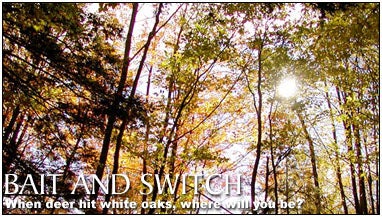 During the final weeks before early bow season, whitetails dupe hunters with a maddening bait-and-switch routine. In late evening, big bucks feed in soybean and other cropfields where their heavy antlers flash like beacons. This is the bait that prompts hunters to place stands near agricultural food sources and grow giddy with anticipation.

The exhilaration evaporates on opening day when the whitetails fail to show. You’ve been had. The deer have switched to their favorite morsel: the white-oak acorn.

When these sweet acorns drop, deer give them top priority. And during years when white-oak acorns are especially abundant, they can make up as much as 80 percent of a deer’s diet.

Look for rubs and droppings below trees to determine which yield the most sought-after acorns. But don’t set up amid the oaks. You’re apt to alarm deer when you approach before dawn, and in the evening, does and fawns arrive before any mature bucks, bringing with them plenty of eyes and noses to bust you with. Instead, look for travel lanes and funnels leading from the oaks, and set up a stand or ground blind downwind of a promising route to intercept deer moving to and from the food source. Here, you’re much less likely to spook deer.