Find buck corridors by looking beyond the obvious. 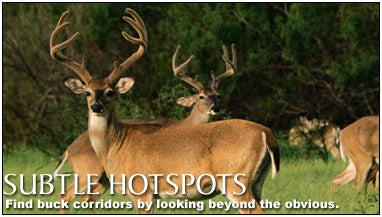 It’s easy to get caught up in scouting for obvious deer sign, such as well-worn trails and well-rubbed saplings. But some of the best whitetail hunters pay less attention to sign than to subtleties.

Of the 14 trophy bucks that experienced whitetail hunter Steve Snow has killed with his bow, half were shot from stands located at least 200 yards from the nearest rub. “Big rubs and scrapes are nice, but I see them as frosting,” he says. “I don’t always need them to know I’ve got a sweet spot.”

The trick, according to Snow, is learning to read the landscape to pinpoint the corridors bucks use to move through your hunting ground. Consider this example: Two woodlots are separated by a large CRP field, which is bisected by a brushy fenceline. With no obstacles to negotiate, bucks could cross the field just about anywhere. Yet invariably, they’ll sidle along the fenceline, using its outline to obscure their silhouettes. That sweet spot is obvious. The subtler ones require some searching.

Security is paramount. So bucks gravitate toward terrain features that hide them as they travel, such as a low spot in a meadow, a saddle in a ridge, or a hillside bench. Vegetation serves the same purpose. Even the thinnest line of cover that’s denser than the surrounding trees or brush will pull bucks like a magnet. One hunter I know found an oak flat so torn up by whitetails that zeroing in on the right tree seemed impossible. Then he noticed a small point of young conifers leading from a swamp into the flat. He set his stand along that point and killed a good buck the first evening.

Economy is also important. Unless a buck is under pressure, he’ll almost always take the shortest, easiest route. “A big old buck is like a hound dog sleeping on a porch,” a mentor once told me. “When he gets up for food, he doesn’t do laps around the house.” This is especially true for pre-rut whitetails, but even rutting bucks searching for does take the quickest route connecting points A and B.

To identify such corridors, start with an aerial photo and mark it with known (or suspected) bedding and feeding areas. Then study the picture for routes between those points that offer both security and economy. Pinpointing such areas will focus your scouting sessions.