You Be the Judge 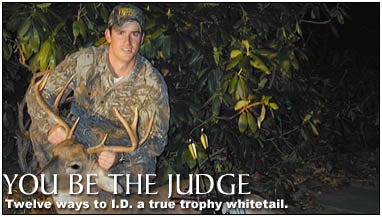 A trophy is in the eye of the beholder. Regardless of the stick you measure success by, however, learning to field judge bucks by the size and configuration of their antlers will make your hunts more interesting. It also will help you decide whether to tickle the trigger. Here are 12 tips to keep in mind leading into this season.

(1) Whitetails seldom give you the full monty. Instead, you see bits and pieces-a nose, a partial antler, the white fringing the tail. For this reason, antler mass is generally the best indication of maturity. A heavy antler beam, even if momentarily glimpsed, catches the eye immediately.

(2) If the sweep of the antlers is obscured by brush, look for the brow tines. Thick, long, or gnarly brow tines are an indication of a mature animal.

(3) The eye of a buck is about 4 inches in circumference. If the base of the antler beam looks to be at least that big around, too, then counting points is beside the point. The parts of the rack you can’t see will seldom let you down.

(4) Another indication of trophy potential is an antler beam that retains its mass past the second or third upright points.

(5) A pronounced curve in an antler beam usually indicates a larger rack than a straight antler beam.

(7) A buck’s antlers often appear larger when gleaming in bright light or when silhouetted against snow or the skyline; they look smaller in dim light or the poor visibility that can come with bad weather.

(8) Antlers appear biggest early in the season, before the buck has grown out its longer winter coat and its neck becomes engorged by the rut.

(9) Generally, a buck that has two main tines (not brow tines) extending upward from the main beam will be an 8-pointer by Eastern count. Most trophy bucks have at least three main tines for 10 or more total points.

(10) A good buck, when facing you, will have an inside antler spread of 17 inches or more, or the width of its outstretched ears in the alert position.

(11) The best way to judge the length of a deer’s antler tines is by comparing them to the length of the deer’s ears, which typically measure about 8 inches. If the first or longest tine appears longer than the ear and the second point is only a little shorter than the ear, you have all the information you need to make your decision. Shoot.

(12) Keep regional differences in mind. An elephantine trophy from Maine or Saskatchewan will have proportionally smaller appearing antlers than Texas deer, which are the pencil-necked geeks of the whitetail clan and can trick you because even an average buck may appear to have a huge head. To be a really good field judge, you need to make snap decisions based on experience. The best way to get that experience is by comparing the racks of deer that are hanging on trophy-room walls. They are the only ones that will stand still long enough for a thorough inspection.