Call softly to get a big buck. 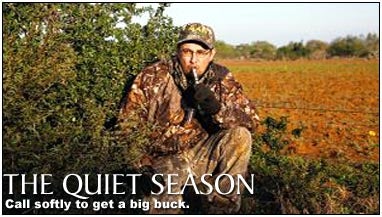 The fantasy goes like this: Hunter blows on a grunt call and crashes rattling horns together. Big buck bumbles in, looking for love or a fight. Hunter makes a chip shot and tags a trophy.

Mark Drury has lived that fantasy. But the Missouri expert and founder of M.A.D. Calls recognizes that such dramatic responses are rare and often limited to the rut. “That may happen only a few times a year, and we hunt hard in some of the best ground in the country,” he says. But even if early-season hunters can’t expect this dream to unfold in reality, they can still make calling work for them.

During this part of the season, callers should imitate the same vocalizations-grunts, bleats, even snort-wheezes-as they would during the rut. The only difference, according to Drury, is in volume and intensity. “I tone down my calling by 50 or 60 percent during the early season. And I limit my calling efforts to the prime times of early morning and evening. On an evening hunt, for example, I’ll wait until the last hour of light, then start making a soft series of grunts every 20 to 30 minutes until dark. The same holds true in the morning, but in reverse. I start at first light and go for 60 to 90 minutes. “Bucks are homebodies during the early season,” Drury says. “So I assume my calls are reaching only one or two bucks that might be bedded in my area.” The same strategy applies to rattling. “As soon as bucks’ antlers are hard, they spar continually. But you rarely hear a big fight until closer to the rut, when a big buck wanders in from another area. Early in the season, I just tickle the horns.”

Hunters who’ve tried calling with little success can use several tactics to increase their odds, according to Drury. “Call during conditions of prime deer movement-an active barometer, a sudden cold front, or a moon that’s rising in the afternoon or setting in the morning. But the most critical factor in calling is the buck-to-doe ratio. If there are too many does, bucks are simply less responsive. The best call to carry-provided you use it-is a doe tag.”