Still-hunting is at once the most difficult and the deadliest technique forhunting whitetail deer. A tree-stand hunter hopes a deer wanders by, but a still-hunter searches bucks out... 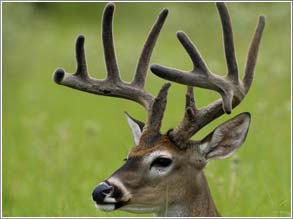 Still-hunting is at once the most difficult and the deadliest technique forhunting whitetail deer. A tree-stand hunter hopes a deer wanders by, but a still-hunter searches bucks out, covering more ground, including places a tree stand won’t work. Despite its inherent difficulty, still-hunting increases the odds of finding a deer during short hunting seasons, especially a mature buck. But only if done right.

Like most human endeavors, deer hunting is plagued by pithy sayings. One goes like this: “When the deer move, you don’t. When the deer don’t move, you do.” This implies that still-hunting works best when deer bed down during midday. Unfortunately for hunters who believe pithy sayings, this is a lie. The prime time for slipping up on a buck is also the prime time for any whitetail hunting — those half-lit hours when deer move through the woods.

Bedded deer can be still-hunted, but unlike feeding or traveling deer, bedded deer have only one job — watching. They normally bed where they can see a ways, their backs to thicker cover and the wind. Even if they don’t see or smell you, they’re not making any noise and can hear your artless footsteps approaching.

To the average hunter this means that still-hunting only works after snow or rain silences the forest. Such “perfect” conditions, however, may or may not occur during deer season, and then perhaps for a day.

So real still-hunters accept making noise. But they make the correct noise and allow other sounds to mask their footsteps. What follows are still-hunting’s basic rules and some examples of them in action. Follow them, and you’ll move like a still-hunter, not a deer alarm.

Be the Deer
Unlike the average human, traveling deer don’t walk steadily through the woods, swiveling their heads from side to side as if window-shopping. Deer take a few short, slow steps, then stop and look. If they see movement or an odd object, they stand still, watching, until they know what it is.

Learn to move like a deer. Move slowly and hesitantly, and spend much more time watching than moving.

One mid-November dawn I hunted a stand of aspens that whitetails used as traveling cover between hayfields and the pine ridge where they bedded. Fallen leaves formed a frozen mat under light snow, so I’d take five tentative steps, like a deer, then stand for five minutes, watching.

Soon, like a deer, I saw movement through the trees, perhaps 125 yards away. In my binocular this turned into the head of a doe, chewing snowy leaves. (In damp weather, fallen leaves ferment slightly, and deer like to eat them.) I stood and watched, and another doe and three fawns moved up behind the first. They fed up the hill, and as I watched, another deer wove through the trees beyond them — a 4×4 buck. I caught one good look before losing him in the trees again. At this time of year he’d follow the does. I started following them, too, slightly faster than they moved, taking a few steps toward an aspen, then slowly leaning my head from behind its trunk to observe. After several minutes, I saw the buck moving behind a forked aspen. I raised my .30/06, the crosshairs found his chest, and the rifle went off.

The buck lunged into another clutch of aspens but didn’t emerge. The does bounded uphill as I approached to find a red trail in the snow, the buck lying gracefully at its end.

Sunrise, Sunset, and Sunshine
Whenever possible, still-hunt early morning and late afternoon. Moving deer make noise and expect to hear other deer. If you move like a deer, you’ll often fool them. And as you move, keep the sun at your back. A low sun hides you better than any camouflage and makes deer shine like four-legged beacons. One dry November I watched sunrise from a ground blind above a creek. Soon the warm sunshine melted my patience, and I left the blind to walk the top of a cutbank above thhe creek, the sun at my back and the oaks along the creek obscuring my outline. The slight current covered the slighter noise of my rubber-bottomed boots in the grass.

After still-hunting downstream for half a mile, I spotted movement above the right bank. Between two oaks, I saw a sunlit buck, as bright as polished bronze, his mouth in the water. I eased to hands and knees and crawled to the edge of the cutbank, carefully picking oak leaves from my path. Through the scope on my 7×57 I counted five tines on one antler, four on the other, the beams spreading well past his ears. I eased the safety forward and aimed just inside his shoulder as he quartered toward me. At the shot he leapt the creek. I heard hooves on oak leaves, then nothing. I rose and still-hunted again along the top of the cutbank, another round in the chamber, until I saw him lying across the creek in the leaves.

Walking and Wind
Walk where deer walk. Walk on deer paths, abandoned roads, or the edges of clearings. Walk close to brush and trees to break up your outline, but stay out of heavy cover. And finally, whenever you can, still-hunt on windy days. Wind makes deer nervous, but even nervous deer eat. A hard wind obscures sound and movement and dissipates scent. A deer may sniff your bacon breath but not be able to detect its direction. I like to hunt crosswind, because deer don’t always travel into the wind. They often move with the breeze, allowing them to watch for danger out front and smell anything behind.

One late October, a big snowstorm blew in during the night. The next morning snow still fell, almost horizontally, and I decided to still-hunt a hardwood riverbottom where deer would hide from the storm.

The wind groaned in the barren treetops; branches cracked and occasionally fell, but I kept on, walking flood channels between the trees. Soon a buck rose from his bed on the lee side of some willows. At 150 yards, through blowing snow, he could not quite perceive me as human, but in my 6X scope I could see his high tines and fired almost as soon as the stock touched my shoulder. He ran into a frozen cattail slough, and a coyote ran out. The buck had almost fallen on him. He lay on the coyote’s tracks, five tines on each pale beam. The finest whitetail I ever still-hunted wasn’t nearly as large. Still in college, I could only hunt opening weekend and absolutely needed the meat. The evening before, I camped in the mountains outside town, listening to hard rain rapping on canvas.

The sound eased to a hissing drizzle toward dawn. Halfway up the mountain, the drizzle turned to light snow. I hunted just below the snow line. Deer hate wet snow on their backs and sense that it reveals their tracks. By midmorning I’d seen nothing, but the woods were once-in-a-season perfect, the wet underbrush almost as soft as spring grass. I hunted perhaps 200 yards an hour, searching each opening through my 7x35s before moving through.

Which is how I found the buck: Through my glass I saw an ear flick 75 yards downhill. Then he turned his head, and I could make out antlers, probably his second pair, thin-beamed and narrow.

But brush covered his body, and even at that tender age, I did not trust neck shots. So I waited as he lay bedded below me, his gaze turned downhill. Soon, however, I realized that the still-cool air around me would eventually seep down the mountain to his nose.

I stood on the edge of a small clearing, with no rest for my .30/06, and sunk silently into a squat, knees in my armpits. I whistled softly. The buck’s ears twitched, but he didn’t rise. I whistled again and through the 3X scope could see his head tilt slightly forward as he gathered his legs. “Don’t run,” I whispered, as he stood and took one slow step, then fell back in his bed, shoulder and spine broken by a 200-grain bullet. And I knew that I was a still-hunter.