Surviving the switch from camo to khakis. 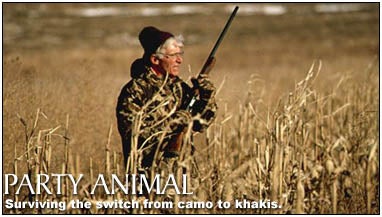 I went to a cocktail party the other night, an activity I don’t particularly recommend. For certain men, temporary incarceration in a small space with strangers pretending to have fun ranks right up there with a tax audit. I sometimes doubt if parties would exist at all if it weren’t for booze, since the very act of making small talk with people you’ve never met is so unnatural that you need to be slightly impaired to do it gracefully. But Jane says it’s good for me to get out and mingle, so, like a chained bear, several times a year I am dragged out for socialization.

This particular party took place during the height of the pre-rut, and I’d been in the woods until the end of legal light, when I found myself pinned in my tree stand by a doe with two yearlings in tow. Not wanting to burn out the stand by announcing a human presence, I let my bow down on the rope and banged it softly in the leaves a few times. They didn’t snort, just stiffened up and moved slowly away. Satisfied, I descended and crept silently out of the darkening woods. I raced across town to the address Jane had given me, crouched down in the shadows between my car and a hedge, and changed into khakis, a button-down shirt, and loafers. Immediately upon entering, I identified this as a classic disaster-in-the-making: many people, bright lights, the din of forced merriment. Also, I noticed that all the other men not wearing ties had on shirts that buttoned all the way up to the neck. Where I grew up, wearing a shirt buttoned up to the neck without a tie sent out an urgent nonverbal signal: Please beat me up. Evidently this has changed, because none of the men seemed the least bit embarrassed by how they were dressed. I grabbed a beer and saw to my chagrin that Jane was engaged in a lively conversation on the far side of the room. Like many women, my wife finds talking to people she has never met invigorating. I sat down on one end of a sofa and tried hard to make myself invisible. But it didn’t work, and I soon found myself face to face with a brightly smiling woman wearing a turquoise necklace. She introduced herself, saying she taught mythology at the local university. “I understand from your wife that you’re a writer,” she said. “What were you working on today?” I told her that I hadn’t been writing at all today, I’d been in the woods hunting deer. The smile dimmed a few watts, and I could see the wheels turning inside her head. She was having what psychologists call an “Aha!” moment: She’d heard of people who hunted deer, and now she was actually talking to one. “And what do you use,” she asked, “some kind of rifle?” I told her that at this time of year, I hunted with a bow. This completely flummoxed her. “Like a Robin Hood bow?” she asked. Sort of, I told her. A compound has wheels on it and is a bit more powerful and more compact than Robin Hood’s. “Is it electric?” she asked. No, I explained, you pull the string back with your arm just like other bows. I was trying to be helpful, just as she was trying to be cordial, but I was beginning to wish I’d said I was in software.

Just then, she looked away for a moment, pursed her lips, and turned back to me. “I suppose you find it hard to explain why you hunt to people who don’t,” she said. I do indeed, I told her.

“I read somewhere-I think it was an American Indian elder who said it-that whatever a man hunts, he’s ultimately hunting himself,” she said. “Is that true? Can you explain that to me?” I said I thought it was true, though I didn’t fully understand it. I told her that for some men, hunting is a kind of discipline, a way of peeling back the layers of mistaken identity that daily life piles up on you. It’s a way of discovering who you are, or maybe remembering who you really were before modern life mixed up who you were as a man with what you did to make money. In that sense, at least, every man who hunts is hunting himself. I asked if that made sensee. “Yes,” she said. “It makes a lot of sense. Maybe too much.” We talked for another couple of minutes before she said she had to go rescue the sitter from her children. She shook my hand and left. I took a pull on my beer and looked around the party. Suddenly I felt looser, a little less scared, like a rabbit who’d been reassured he wasn’t to be eaten that particular day. A few minutes later, fetching a second beer, I found myself waiting my turn at the refrigerator next to a guy with mousse in his hair and a dark-green silk number that buttoned up to the neck. “Cool shirt,” I said.