Why I Hate Treestands

Stop acting like a squirrel and go on the prowl. 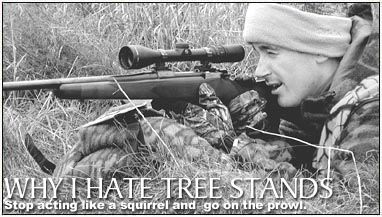 Once upon a time whitetail deer weren’t as abundant as lawyers. People actually had to look for them, and climbing a tree to ambush a buck was considered deviant behavior. Times have obviously changed, and now hunters look at me strangely when I publicly claim to hate tree stands.

Hate may be too strong. Actively avoid is closer to the truth. Tree stands only give hunters two advantages: the ability to see down into cover, and the dissipation of human scent into the upper atmosphere. The list of disadvantages is far longer.

Immobility and Compromise
Once I placed a tree stand to overlook a creekbottom in the Black Hills of Wyoming, with the breeze at my back. I planned to do some rattling and grunting, and called-in whitetails typically circle in downwind. But on this morning a mature buck came in behind me, snorting once from the edge of the pines to my left. I glimpsed him as he walked inside the timber, but he circled behind me, where it was impossible to shoot. We grunted and snorted at each other for five minutes before he moved off, never to be seen again. From a ground blind, I could have killed him easily by crawling into a good shooting position.

A tree stand locks us into one spot, a big disadvantage not only when a buck hangs out of sight but also when Farmer Brown decides to drive by an hour before dusk, frightening nearby deer. Some claim tree stands always offer hunters an improved vantage point, but quite often the branches of the forest surrounding a tree stand actually limit vision and shooting lanes. Often the best tree for climbing isn’t located in the best spot for hunting, so we compromise and end up in a less-than-ideal spot. Even the lightest portable stands are a pain to pack over hill and dale, so we hunt too close to roads. And much geologic time has passed since humans were primarily designed to climb trees. Most modern hunters are more adept at climbing couches, so falls out of trees are far too common.

When tree stands started spreading across the country 30-odd years ago, hunters claimed climbing was effective because deer never look up. But deer are pretty smart. In country where every other October oak holds a human wearing camo, they’ve learned to look up frequently. A lot of the time you’ll be more invisible on the ground than up a tree, especially after the leaves fall. Deer have fed less than 10 feet from where I sat on a folding stool, sometimes when I wore blaze orange. If I sat still, the deer never noticed me.

Today tree stands aren’t as necessary for help in dissipating scent. While some hunters (and many advertisements) exaggerate the ability of today’s cover scents and scent-blockers, such products actually do minimize our foul stench. Thanks to modern chemistry, I’ve sat on the ground with the breeze in my face and had deer walk unconcerned 50 yards behind me. Playing the breeze is much more important than allowing it to drift over a deer’s head, anyway.

**Freedom and Versatility **
What is the big advantage of hunting from the ground? You can move. If the deer come from the “wrong” direction, you can twist or crawl and get a shot. If they’re not ambling by, you can go find them. And if a herd of Herefords picks your field for their evening meal, you can melt into the woods and find another place to hunt.

Most tree hunters don’t know the basic rules of hunting from the ground. They move too much and sit wrong. They walk slowly through the woods, rarely stopping. Instead, they should move even slower, and make frequent stops much longer than the time spent walking.

They should sit or stand in front of an oak or chokecherry patch, allowing nature to break up their outline. If there is also something in front, about rib high, so much the better. If you hunt the same way for a season, you may learn to dislike tree stands, too.