Frozen in the Forest 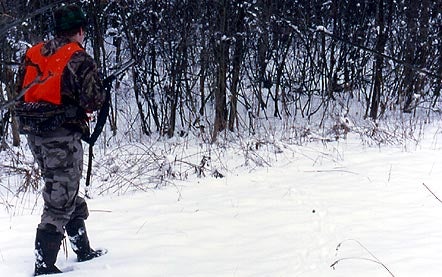 Mesmerized by hoofprints in the snow, a deer hunter can lose track of time. This inclination can land him in the most common survival situation hunters face-that of spending an unexpected night in the wilderness, with the temperature plummeting.

When Dick Arsenault finally gave up on the second buck he’d tracked that day, he was deep in the folds of Maine’s White Mountains. His compass was buried somewhere along his path; brush had sprung the pin that affixed it to his jacket. It was the second week in December and wicked cold.

Knowing that his wisest course was to build a fire and sit out the night, Arsenault, an experienced woodsman and the former president of the Maine Antler and Skull Club, gathered what pulpy spruce boughs and mossy twigs he could find and managed to light them. Unfortunately, his fire was more smoke than flame, and he quickly realized that he would spend more time gathering fuel than absorbing the heat.

Safety lay to the south, where he had parked his truck on a logging road that morning after separating from his hunting partner. To the west spread a morass of swamps and spruce thickets; to the east and north was Canada. Navigating at night, with the stars hidden behind clouds, would not be easy. But he knew that most of the planes flew to the north, across Quebec. He also knew that the prevailing winds were from the north. By walking with the wind at his back and the sounds of the planes over his shoulder, he thought he’d be able to both stay warm and make progress toward the road.

“I decided I’d walk till I got warm, stop till I got cold. The purpose was to kill time, not cover ground,” he says. Because Arsenault didn’t want to risk sitting down and losing his body heat through the snow, during breaks he leaned back against small spruce trees with his feet stuck out in front of him. That way, warm air from the core of his body would rise up under the back of his coat and be trapped between his shoulder blades.

Arsenault’s plan worked until he decided to cross a frozen bog. Nearing the far shore, he cracked through and sunk to his knees. When he struggled out he could feel that his socks were wet, but his feet were not as soaked as he had feared. To get his boots off he’d have to cut the frozen laces with his knife. But then what? Building a fire hadn’t worked earlier; it would be even more difficult now. He decided to plod on. When dawn arrived, he realized that he had stayed on course all night without the aid of a flashlight and was only a couple of hours from the road. Soon after he heard the sound of an airplane flying overhead-it was his hunting partner, a game warden, searching for him. Arsenault ended up beating the rescue party to his truck by several minutes.

**The Analysis **
The rule of thumb when night falls in the Big Woods is stay where you are. “It’s much easier for searchers to hit a stationary target than a moving one,” says search-and-rescue professional Lt. Mike Tuttle. But he points out that Arsenault is an exception. “If you know the country, then it depends on the individual.” The one mistake Arsenault made was trying to cross the frozen bog instead of taking the longer way around. He did a superb job of navigation and of not letting himself overheat. Most important of all, he didn’t panic.

The Rules **
Precautions for hunting in remote country begin at home. **( 1 ) **Step onto a sheet of tinfoil to make an impression of the tread. This will help searchers isolate your tracks should the necessity arise. Leave the foil with friends, along with a note detailing where you will be hunting, when you expect to return, and when someone should call for help. ( 2 ) Dress in layers of breathable, insulating fabrics that retain warmth when wet, such as spun polyester underwear and wool, fleece, or pile vests and jackets. Add a shell to repel moisture. **( 3 ) Never enter the woods without a lightweight tarp for emergency shelter, fire-starting materials, and two compasses should one fail or be lost.** ( 4 )** Pack enough insulation to stay warm in case you can’t keep a fire going.