Light on Your Feet

New styles of waterproof boots keep you sure-footed and scent-free. 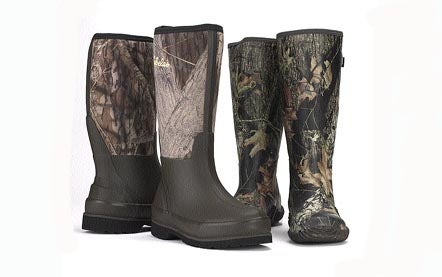 Most whitetail hunters own a pair of traditional high-top rubber boots-and for good reason. Despite the fact that these typically weigh 7 pounds per pair and can wear you out on a hike of any distance, they’ve long been the best answer to containing foot odors that can send deer in the other direction.

That, however, is changing.

A pair of boot manufacturers are setting a new trend in high-top waterproof boots by incorporating neoprene in their construction. The results look very much like your old rubber clunkers-and they still keep your stinky feet under wraps-but they weigh considerably less.

I took almost 3 pounds off my feet by switching to 16-inch waterproof Mud Boots from Rocky ($70; 740-753-1951; www.rockyboots.com). They feature a lightweight Tufftex nylon and neoprene soft-shaft upper matched to a ridged rubber outsole for solid footing in slippery conditions. The boots come in Mossy Oak Break-Up camo and weigh only 41/2 pounds per pair. I can hike comfortably for miles in them.

Rocky also offers a newer 17-inch model called the Buckstalker Light, with an even lighter but still rugged outsole that brings the overall weight down to a wispy 31/2 pounds. This model also comes in Mossy Oak Break-Up, in a choice of noninsulated ($89) and 1,000-gram-Thinsulate ($99) versions. Cabela’s offers a similar 16-inch boot with camo uppers called the Bog Buster ($60; 800-237-4444; www.cabelas.com). A 7mm neoprene bootie envelops your foot, ankle, and lower leg. This, along with the boot’s “heel-lock” construction, is designed to prevent your foot from pulling free or moving around inside the boot while you’re negotiating mud and muck, providing a close, comfortable fit that’s often lacking in traditional rubber boots. They weigh just over 41/2 pounds per pair and have aggressive treads for sure traction.

Because my Rocky Mud Boots have no insulation, I carry ArcticShield Boot Insulators ($45; available from Cabela’s) with me during cold-weather hunts. Once I reach my stand, I pull these soft camouflage slippers over my boots, and my feet will stay warm down to minus 110 degrees. What’s more, I don’t wind up sitting in the cold sweat that used to result from traipsing around the woods wearing a pair of 7-pound clunkers.

Single Sight
Three years ago during the early bow season, a friend-an accomplished hunter-had his first Boone and Crockett buck standing broadside at 20 paces. With several Pope and Young bucks under his belt, he felt reasonably collected. But the arrow sailed over the buck’s back. It was the only opportunity he would ever have to take that magnificent whitetail.

Later, he checked the bow at the range. It was dead-on. He concluded that he had used the wrong sight pin. To avoid confusion, he switched to a single sight pin and has had no trouble since.

With a compound bow that shoots 250 fps or faster, a single pin set at 25 yards puts an arrow in the boiler room from zero to about 32 yards. This is how Shane Hyme, the bow guru at Fairfield Outdoors in Lancaster, Ohio, rigs his own hunting bow.

“With this setup, I can put the pin behind the front leg, and I’ll be no more than 2 inches high or low out to 32 yards,” says Hyme. “Most shooting opportunities last only seconds. If you’re befuddled about which sight pin to use, you’ll probably make a bad shot.”