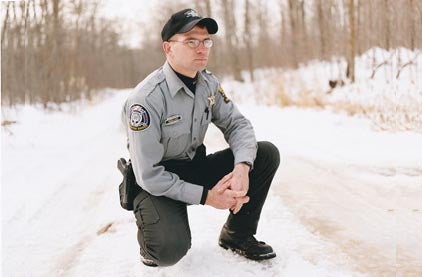 Wisconsin Department of Natural Resources warden Jeremy Peery has made his share of arrests during his six-year career, but none compare to the bust he made on November 21, 2004. That Sunday, Wisconsin’s firearms deer season was host to a tragedy that shocked America. What happened has been widely reported: A trespassing dispute between members of a local hunting party and 36-year-old Minnesota hunter Chai Soua Vang in the woods near Exeland triggered shootings that left five hunters dead and three injured (one mortally) and landed Vang in the Sawyer County Jail as a suspect facing multiple homicide charges. The story of Vang’s capture, as told by the arresting officer, isn’t as well known. Here’s his account:

Peery, a 28-year-old resident of Ladysmith, Wisconsin, was patrolling about 35 miles south of Exeland that morning with fellow warden John Hagen. “About 12:20 Hagen received a cellphone call from Joseph Crotteau, his longtime friend and the brother of Robert [BRACKET “Crotteau, one of the victims”],” Peery recalls. “He described the scene and didn’t know what to do. We informed other law enforcement agencies and raced to the area to set up a perimeter roadblock. One of the victims had written Vang’s back-tag number in the dust of an ATV at the scene, so we ran a check and knew exactly who we were looking for.”

At about 5 p.m., as SWAT teams and a DNR plane searched the area, Peery met a hunter leaving the woods on an ATV and helped the man load the rig on his truck. “As we finished, I heard another ATV approach, and I turned to meet them. They were 20 feet away when the driver stopped, pointed to his passenger, and said, Â¿Â¿Â¿This guy says he’s lost. Can you help him?’ The passenger had dismounted and was carrying his rifle across his chest with his finger on the trigger. When I shined my light on his face, I immediately drew my sidearm. He matched the description of the suspect.”

Peery identified himself and instructed Vang to drop his weapon (which was unloaded) and to make no sudden movements or he would be shot. “Vang told me he had no other weapons and that his identification was in his pocket. I handcuffed him, patted him down, then searched for his ID but couldn’t find it. So I pulled down his camo jacket and looked for his back tag. The number matched the one written at the scene. I informed Vang that he was being held for questioning in a shooting incident that had happened that day. Then I noted where the other hunters were standing in case he resisted when I led him to my truck. I wanted to keep everyone safe.”

Peery belted Vang into the passenger seat of his truck for the 15-minute drive to meet Wisconsin State Patrol. “He was calm during the entire process and on the ride out,” Peery recalls. “I radioed the DNR pilot that I had the suspect in custody. I just kept one eye on him and the other on the road. In a situation like that, your training just takes over. But later, a half hour after I’d turned him in, my mind started going over the what-ifs. What if his gun had been loaded? What if he’d resisted? It wasn’t until then that the magnitude of the incident hit me. It was the biggest arrest of my career, and I hope nothing like it will ever happen again-to me, or anyone else.”

The killings cast a surreal pall over the remainder of the state’s whitetail season, and the victims’ hometown of Rice Lake became a community of mourners. “You hear about people snapping and doing terrible, violent things, but not in the deer woods among your friends and neighbors,” Peery says. “We’ll all be in a state of shock and grief here for a long, long time.”