The high jumps, handouts, and smoke. 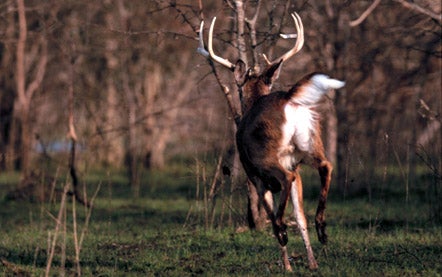 _Last season, I watched a deer jump a fence that must have been at least 7 feet tall, and it did so without the slightest difficulty. How high can a deer jump? And while we’re on the subject, how far can they jump? _

Whitetails have tremendous agility and speed to evade predators. Free running deer have been clocked at almost 40 mph. Although I don’t think anyone has attempted to determine the ultimate height that deer can jump, I know of some reports of their jumping fences at least 9 feet high. However, deer will almost always opt to go under a fence rather than over-even if it’s only 4 or 5 feet high. Interestingly, deer typically won’t jump over a barrier that they can’t see through. A solid fence 4 to 5 feet high seems to be as much of a barrier as an 8-foot woven wire fence.

Measuring the distance that a deer can jump is much easier-you just have to measure the gap between tracks. From the reports that I’ve seen, a running deer can easily clear a span of 25 to 30 feet, and perhaps more.

_I feed corn to the whitetails in the woods behind my house. It gives my whole family a chance to watch deer up close, and I think it helps the herd make it through the winter. But I’ve heard that you should never feed deer. Why? _

There is a time and a place for everything, but in most cases feeding deer is a bad idea. Deer easily become habituated to feed and will certainly lose some of their natural wariness of humans. Once they get accustomed to coming to your yard, corn won’t be the only thing they’ll eat. Gardens and landscaping are prime targets, and you’ll be inviting property damage not only for yourself but also for your neighbors. Soon this animal that we view as a magnificent game species will become a hoofed rat in many people’s eyes. Also, once deer become habituated, the potential for collisions with vehicles rises.

Remember that the more we artificialize wildlife with handouts, the less wild wildlife becomes. Perhaps Aldo Leopold said it best over 70 years ago when he wrote “TheÂ¿Â¿Â¿value of a game animal is inverse to the artificiality of its origin and the intensiveness of the management system that produced it.” To get more information on feeding wildlife, contact the Wildlife Management Institute and request their publication Feeding WildlifeÂ¿Â¿Â¿Just Say No! (available at www.wildlifemanagementinstitute.org).

_Will smoke from a campfire affect deer during hunting season? _

Only if it gets in their eyes. Seriously, I doubt very much that deer have the deductive ability to equate smoke from a campfire with the presence of a hunter. In fact, deer seem to be attracted to areas that have been recently burned. Here in the Southeast, I’ve seen fresh deer tracks in burned areas where some stumps were still smoking. Smoke in the woods does not produce the panic among wildlife that Disney films portray.