R. Wayne Bailey has been hunting and studying wild turkeys for 60 years, and he is the deadliest thing in the spring woods. They are smart. He is smarter. 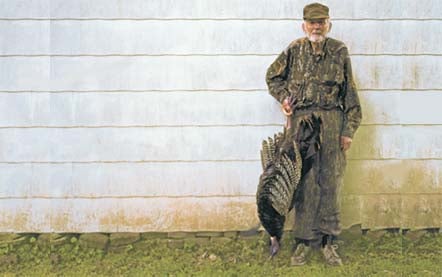 [BRACKET “BACK FROM THE EDGE”]
That was wild turkey No. 239 for Bailey, one of America’s preeminent wild turkey field biologists and the point man for turkey restoration efforts across much of the East. Born in tiny Rock, West Virginia, in 1918, Bailey went to work for that state’s game department in 1945. He live-trapped his first wild turkey a few years later, capturing the bird with a homemade net jury-rigged from plumbing pipe and dropped from the ceiling of a state park picnic shelter.

Bailey came to turkey science with the heart of a hunter. He grew up gunning for the table-rabbits, squirrels, grouse, ducks, groundhogs, whatever would fill a Great Depression pot. Even then, he says, there was a mystique about the wild turkey. “They were very rare in those days,” he says, “but West Virginia still had an open season. My goal was to bag a wild turkey before they became extinct.”

[NEXT “BORN TO GOBBLE”] [BRACKET “BORN TO GOBBLE”]
Bailey’s first fieldwork with the West Virginia Conservation Commission involved clipping the toenails of trapped rabbits to mark them for a mortality study, but it wasn’t long before he discovered his true aptitude. He was crazy about turkeys: He snared them with drop nets and walk-in wire traps, spending long days in the blind.

Then, during the early 1970s, cannon-propelled nets revolutionized the task of capturing wild animals for study and transport. Thirty feet wide and 50 feet long, the nets were cabled to 5-pound projectiles and launched over feeding turkeys with black powderÂ¿Â¿Â¿powered mortars. A quantum leap over fussy, small-scale drop nets and box traps, the practice nonetheless required stealth and skill. Flocks were lured to the target area with bait. On the day the trap was set, camouflaging the net was critical because turkeys needed to be within 2 to 5 feet of it, with their heads down, for the launch to work efficiently.

And skittish turkeys were only a part of the challenge. Areas that supported populations lar enough for successful trapping operations were jealously guarded by locals who were incensed that birds were being removed. Biologists would return to their setups to discover sabotaged nets, equipment, and blinds. Technicians began to cover their tracks. They hauled blinds, nets, and bait into the woods before daylight and varied the routes they used to check on sites, like moonshiners, telling no one about the locations.

[NEXT “THE BAILEY WAY”] **The Bailey Way **
R. Wayne Bailey uses a half century of turkey science to sharpen his hunting skills. Here’s how.

Hunt the second peak of gobbling Opening day may not be your best bet to bag a gobbler. There are two peaks of gobbling activity during the breeding period, and the second often occurs deep into the hunting season. Most hens are already on a nest and aren’t very interested in mating, Bailey says. “But the gobblers sure are.” Since fewer hens respond, toms advertise even more vociferously.

**Hunt in the after- noons ** Where legal-and more states are opening afternoon hours-hunting late in the day can be very productive. In the spring, hens sit on the nest until the day warms up sufficiently so that they can leave without exposing their eggs to cold air. “Gobblers, of course, know this, and they follow the hens in the afternoon.”

**Dust off **Turkeys frequently dust themselves in patches of dry, loose soil. Bailey makes dusting sites around his favorite hunting areas. Using a small garden trowel carried in his bird vest, he loosens the soil in 4- to 5-foot circles along the edges of small fields and travel ways.

** Go horizontal** “Everybody knows that a turkey’s eyes and ears are incredibly sharp,” Bailey says. “That’s evolved because they have such a poor sense of smell.” To break the barrier, he frequently blinds up by lying down in a shallow depression.

** Let the birds work you** Allow the birds to do most of the calling, especially in pressured areas. “Many times I just call once or twice and then let the birds hunt for me,” Bailey says. Take a stand For many turkey hunters, calling is the only game. Not for Bailey-he frequently takes turkeys by stand hunting and watching travel corridors.

** Know your gun** Pattern your shotgun. “Mine shoots 6 inches high,” Bailey says. “If I aim at a bird’s head, I know I’m going to miss it. Don’t assume that shotgun bead means a thing.”

** Use a decoy in pres- sured areas ** As hunting pressure and suburban development intensifies, turkeys are seeing more and more people. Bailey figures a decoy helps dial back the anxiety level of an approaching gobbler.

**Hunt restoration areas **Restoration areas that have recently been opened to hunting are the very best places to hunt. “I don’t necessarily change my tactics,” Bailey says. “I just think the traditional ways of hunting them are more rewarding because the birds haven’t yet learned about the perils of hunting season.”