Five fall festivals that are tailor-made for sportsmen. 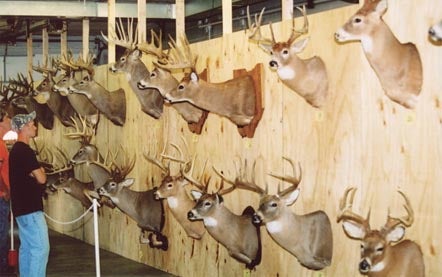 For most sportsmen, autumn can’t come fast enough, so its arrival is reason to celebrate. These five festivals go all out. But you might need a bag of corn, a 12-gauge, or a frozen turkey to join in.

Drive to Marlinton-picking up ingredients on the way-and join the thousands who will cook, taste, and judge recipes whose main ingredient must be an animal you’d commonly find squashed along the pavement. Last year’s menu included “Buzzard Breath Maggotini,” “Wapiti Relleno,” and the first-prize winner, “Buffalo Balls.”

Hit Gaskin Park Landing to fish for 24 hours straight with several hundred competitors vying for more than $10,000 in prizes. Hook up with the new state-record flathead and you’ll drive home in a new 4×4 with boat in tow. When the fishing’s done, join about 5,000 others to catch the crowning of 2005’s Little Miss Catfish.

Two towns claim to be the World’s Turkey Capital, so the dispute is settled annually at the Turkeyfest’s Great Gobbler Gallop. In 2005 two turkeys (Cuero’s Ruby Begonia and Worthington, Minnesota’s Paycheck) will race for their town’s right to the title, and the Traveling Turkey Trophy of Tumultuous Triumph. Humans compete in Frozen Turkey Bowling.

Up to 25 teams of hunters will shoot it out, and up to 40 of their dogs will sniff it out, for a total of over $9,000 in prizes during the festival’s Competitive Hunt and Bird Dog Challenge. Events also include a sporting clays contest, a youth shoot, and two shooting exhibitions featuring Benelli’s renowned shotgunner Tom Knapp.