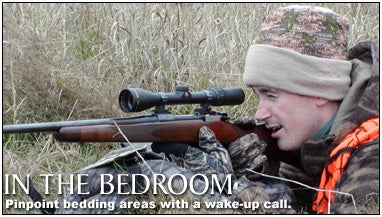 Prior to the rut, the best bucks typically move only at the edges of daylight. To put one in your sights during shooting hours, you have to take a stand close to where the animal sleeps.

Too many hunters, however, only guess where bucks bed, because they believe such areas are off-limits. Most assume that if they jump a buck from its resting place, it will vacate the hunting area or forgo all daytime movements. But renowned whitetail hunter and author Greg Miller has discovered otherwise. “My success rate with big bucks improved when I quit guessing where they bed,” says Miller. “Now I purposely bump bedded bucks. That tells me exactly where they sleep.”

**Wake-Up Call **
To do so, Miller walks casually through bedding areas, as if he were simply taking a hike. As a result, he says, bucks view him not as a threat but as someone just passing through, and they soon return-provided he doesn’t pursue them or linger too long. Once a buck is bumped, Miller quickly determines where to place a tree stand 75 yards or more downwind from the bed. Then he gets out.

Avoiding unnecessary trips into the area, Miller doesn’t go back again until he’s ready to hunt. When he is, he brings a hang-on stand with screw-in steps or strap-on climbing sticks-a setup he’s learned to erect silently through practice. “Climbing stands,” he says, “are too noisy for setting up close to bedded bucks. Make one offensive sound, and the jig is up.”

Another very good option is to carry a stand when you bump a buck, putting it up before you leave. Upon returning, you need only climb silently to your perch.

Best Beds
“Some bucks bed on open wooded ridges, or in other locations that give them a visual advantage,” says Miller. “These deer are almost impossible to set up on. You’ll have better luck getting close to bucks that bed in thick cover and on high spots in swamps and bogs.”

Bedding areas on farmland with broken cover are easier to locate because deer have fewer options. Wherever a trophy buck beds, he avoids antlerless deer, so you’re apt to bump either a lone buck or a few that are bedding in the same area. If you jump a single deer but do not see it clearly, abundant rubs at and around the site will tell you that you should return and hunt.

“This strategy goes out the window during the rutting season,” says Miller. “That’s when you want to hunt where does bed. But before and after the rut, a buck’s bedroom is the best place to set up.”