You've got to get wet to hunt deer in their favorite hiding places. 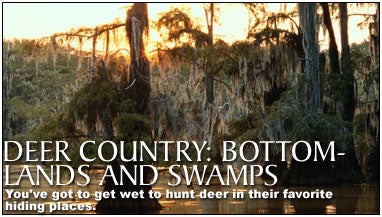 The deer was submerged. Only its nose, eyes, and the tops of its ears were visible above the stagnant water in the slough. It was swimming circles in a pool no bigger around than a hot tub.

I’d spooked it from a patch of willow while I was stalking a pair of Canada geese. I hadn’t thought I’d see it again-I often bump into deer along Montana riverbottoms-and my only concern was that it didn’t put the birds up. But then, as I rounded the bend, I caught sight of it out of the corner of my eye. It didn’t see me, and at first I thought the sides of the pool might be too slick for its hooves to gain purchase. For perhaps 10 minutes it swam around, while first my gun arm and then my cramped legs went to pins and needles. Finally the deer stopped at the near edge of the pool, climbed out, and keeping its belly to the ground, slipped back into the thicket without a sound.

This was the most remarkable thing I had ever seen a deer do, and it drove home two points about hunting that I’d managed to forget since leaving the Michigan cedar swamps of my youth: First, whitetails are ingenious in their use of water to escape hunting pressure. Second, they are extremely reluctant to leave the tangled bottomlands where they find sanctuary.

Big Bucks in Low Places
Wherever you find swamps and riverbottoms-from the western cottonwood thickets to the Carolina low country, from the cedar swamps along the northern tier to the otherworldly cypress and tupelo gum bayous of the Mississippi Delta-you’ll find deer in abundance, typically with a higher percentage of mature bucks than survive in higher elevations. Many live in marshy areas year-round. Others, as radio-collar studies reveal, point their hooves toward the water as soon as shots are fired in the fall.

Deer that live in riverine thickets adjacent to grainfields are the easiest to pattern. Find the trails they use between the feeding and bedding areas and place your morning and evening stands accordingly. Deer of the deep swamps depend less on human agriculture than they do on green browse and the nuts of a dozen or more species of oak. A wise hunter will spend as much time using his binoculars to determine which trees are bearing acorns as he will deciphering the tracks at his feet. In some places, high water washing through the floodplain deposits a tide line of acorns, and when it recedes the deer key to those areas.

River crossings and spoil banks deposited by dredging act as funnels for deer activity, providing natural ambush points for patient hunters. The tracks will show you where to place a stand (in cattail marshes, use a tripod stand, not so much to get your scent off the ground as to see over the cover). Hunting scrape lines can be equally productive. Just remember that if you shoot a deer that’s only a few steps away from the water, it’s not going to leave a blood trail. Use enough gun and take a rest to make sure of your shot.

**Slipping **
Still-hunting, called slip hunting in the South, is most effective during the rut when bucks travel widely. In cypress and tupelo swamps, most slip hunting is done from pirogues, similar to canoes, which afford the only practical way to get around. This brings up a pertinent point that hunters of the highlands never have to consider-while it’s one thing to outfox a swamp deer, finding a way in to the tussocks and islands where he hangs his hat is a separate matter. Check your regulations before getting in a boat. In some states it’s illegal to hunt deer from a motorized boat, and in a few places you can’t carry a rifle in a boat during deer season or shoot a deer that’s in the water.

Swamps and bottomlands aren’t for the faint of heart. In the South, you’ll have to contend with mosquitoes and moccasins. Up North, water only a few degrees above freezing constitutes its own hazard. But once they come under the gun in the fall, bucks thhat have the opportunity head for the low country. If you want one badly enough, you’re going to have to get your feet wet.