In the wide open spaces, big deer can disappear in plain sight. 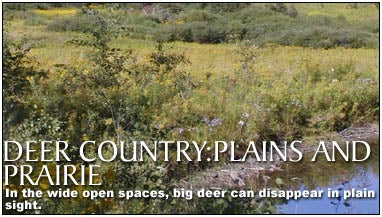 Hunters used to pursuing whitetails in thick cover often become confused when they try to hunt these “forest” deer on the Great Plains. Traditional whitetail hunters just can’t imagine bucks living out in the open, but that’s where the larger deer often hang out. Does, fawns, and younger deer live in the brushy coulees and hardwood draws of the high plains, and those obvious spots draw most hunters. However, like big bucks anywhere, prairie whitetails pattern humans far more successfully than most of us pattern deer, so it’s best to avoid the obvious.

I’ve found mature bucks bedded in the sparse grass under a four-strand barbwire fence, a mile from the nearest “whitetail cover.” I’ve jumped them from rock piles in the middle of a wheatfield, and from under the lone, spindly juniper tree in a rolling cattle pasture. I’ve spotted their antlers rising like barren brush from the foot-deep washout in the bottom of a wide draw, and bucks that looked like shadows bedded amid the spikes of yucca plants on a distant hillside. The only time many big bucks leave the security of the wide open for thick cover is when a blizzard or the rut forces them to accept the company of other deer.

The Spot
Prairie deer follow regular travel corridors just like woods deer, but the patterns are broader, often far broader than the reach of a .270. Instead of waiting for deer to wander by, you find the deer and go to them. Spot-and-stalk hunting works for these whitetails just as well as it does for muleys.

Early and late in the day, you may find a buck up and feeding, but mature prairie deer tend to be nocturnal, just like the big ones anywhere. More often you’ll be looking for bedded deer, especially before the rut. These whitetails normally lie down where they have a long view, with their backs to the wind so that they can smell anything approaching from behind. Because they see very well, we must see them first, from afar. A good binocular is essential and must be used carefully to pick apart distant hillsides from at least half a mile away. Use a full-size binocular of 8X to 10X power. Objective lenses should be at least 40mm across.

Most of a prairie buck’s body matches the surrounding colors, but his black nose and white throat patch stand out in contrast. His antlers are often pale because there are fewer sap-laden trees to rub them on. If the sun is at the right angle, you’ll sometimes catch the shine of a polished rack.

Sit down and look hard, bracing your arms on your knees, or lie down on the crest of a ridge. If the weather’s cold, look particularly on south-facing slopes. A sunny day makes for ideal glassing weather because deer will bed facing the sun-making them easier to spot, and your backlighted form, tougher. On warmer days they’ll be in the shade, which makes picking them out harder but not impossible.

**The Stalk **
Once you locate a deer, use any feature of the terrain to get closer. I’ve crawled through dry irrigation ditches to get to a buck bedded along a distant fenceline. Even if you run out of cover, all is not lost. Once I put the moves on an eastern Montana buck feeding with some does in the middle of a harvested sugar-beet field. Crawling along a shallow draw didn’t get me quite close enough, and so I took off my daypack and pushed it up the edge of the draw. The deer saw it instantly, but the pack didn’t look human. I crawled toward them slowly, pushing the bag ahead of me. Perhaps they thought it was a porcupine, or perhaps they didn’t think at all-but my stratagem worked. Soon I was within sure .270 range and slowly eased my rifle onto the pack for a very steady rest. At the shot, the buck turned to run, but after 50 yards he was lower to the ground, and then he tumbled into the black dirt of the field.

If a buck is chasing a doe beyond sure rifle range, try to circle ahead and set up for an ambush. Normally this situatioon occurs early and late in the day, when does are traveling between bedding and feeding areas. Stalking a rutting male himself is fairly easy, but the females will often bust you. It’s actually easier to stalk before the rut, but you’ll see more bucks during the rutting moon.