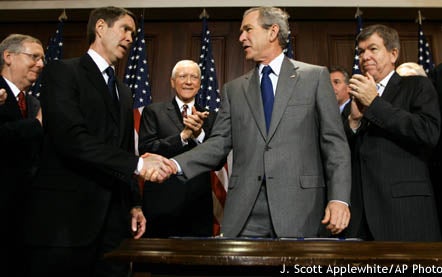 Yesterday, President Bush inked his name to the Protection of Lawful Commerce in Arms Act and at once sealed the gun lobby’s biggest victory in more than a decade, bolstered the economic future of the gun industry, and furthered the Second Amendment freedoms of every hunter and shooter in this country. Since the late ’90s, lawsuits attempting to hold gunmakers and dealers liable for the criminal misuse of their products have cost the firearms industry millions of dollars and threatened to put some makers out of business. This new legislation shields the industry from any such lawsuits in the future and could result in the dismissal of nearly a dozen pending suits. What NRA president Wayne LaPierre announced after the bill passed the House on October 20 can only be truer now: “the Second Amendment is probably in the best shape in this country that it’s been in decades.”