Kitsch items are tacky, annoying, and ultimately useless, yet they somehow become the stuff that the sportsman who has everything can't do without. 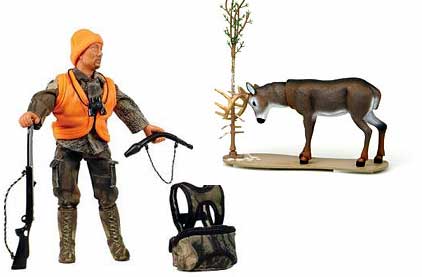 Buck the Singing Deer made quite an impression on my daughter. Brooke jumped and grabbed my hand when the fake whitetail mount-triggered by a motion sensor-broke into “Suspicious Minds” as we passed it in Wal-Mart. But when Buck (right) launched into “I’ve Got Friends in Low Places,” my 6-year-old asked if we could buy him for Christmas.

Kitsch items have that effect on us. Though they’re often tacky, annoying, and ultimately useless, they somehow become the stuff that the sportsman who has everything can’t do without. Here are some ideas for those who want to give-or get-the gift of kitsch this season:

If you’re looking for dashboard decor, consider the Bobble Buck from Wild Bobbles-a trophy 10-point bobblehead doll rubbing a tree. And if you need a sportsman to go with your deer, Animal Tales has a “#1 Hunter” and a “#1 Fisherman” bobblehead (did John Merwin model for both?).

In the home category, Ducks Unlimited offers the Waterfowl “Crash” Doorstops . The heavy-resin cast mallards and canvasbacks appear to have made a bad landing at your doorstep.

Being woken by a tom turkey is cool enough, but the most effective feature of the Broken Silence Clock from Wildlife Heritage is the snooze alarm-if the gobble wasn’t enough to rouse you the first time, a shotgun blast will get you moving a few minutes later.

You may never kill a 38-point whitetail, but three surprisingly accurate record-buck action figures from Hunter Dan’s World Class Collection allow you to act out scenarios with the Lovstuen, Hanson, and Beatty bucks-if you can wrestle them away from your kids. -Scott Bestul