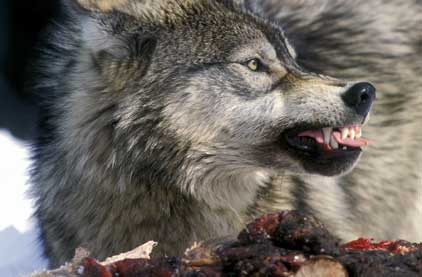 A FUNDAMENTAL ASSERTION in support of wolf reintroduction-the almost constantly repeated claim that no documented case exists in North America of a fatal wolf attack on a human being in more than a century-was refuted, tragically, last month.

On the evening of November 8th, two hours after he went for a walk, alone, the torn body of twenty-two-year old Kenton Joel Carnegie, an Ontario geological engineering student completing a work-study program with a mining company in northern Saskatchewan, was found by his co-workers, surrounded by wolf tracks. Autopsy results confirmed animal bites as the cause of death. In the same area, less than a year earlier, another man fought off an unprovoked attack by a healthy wolf, suffering serious injuries. This has shattered the myth of the retiring, no-threat-to-people wolf.

Between 1990 and 2000, almost two-dozen instances of wolf aggression toward humans were officially recorded, including obvious attempts to kill and eat a person. With growing numbers of wolves in the Lower 48, widespread benign misconceptions about their predatory nature, a decline in the species they prey on due to their own highly efficient hunting, and no hunting programs for them as yet in place, such incidents can only continue, if not increase. A hunter or anyone outdoors in wolf country should be aware that any wolf he encounters, that does not immediately turn and run, isn’t merely curious or wanting to be petted, but is eyeing him the way a famished ten-year-old eyes a Big Mac.

Past wolf coverage from Field & Stream
Is it Time to Hunt Wolves? (April ’01)
https://www.fieldandstream.com/fieldstream/fieldnotesnews/article/0/,13199,548552,00.html

Think we should be hunting wolves? Take the poll found near the bottom of our home page and let us know. We’ll run your responses in our March 2005 issue.

You can also send us your thoughtson this issue by typing them in the field below.

Have any comments? Send them to us here: