A Sportsman’s Life: Undressed to Kill 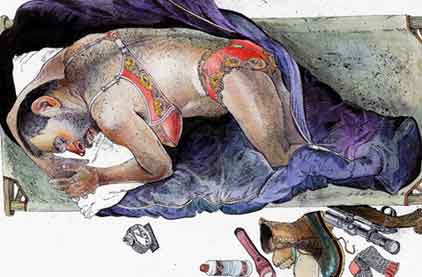 No part of this magazine is more eagerly awaited than the sage advice from the likes of Jerome B. Robinson, Keith McCafferty, and T. Edward Nickens. These are guys who know from personal experience that:

I learned some valuable field lessons myself this year that I’d like to pass on. I’m not claiming they rise to the postgraduate level of woodsmanship. But if you’re still awaiting a bunk in the gifted-and-talented section of hunting camp, listen up.

Sleep with your clothes on
On a deer hunt in the Adirondacks, Gerald Marcury and I agreed that I would head out before first light, hike to a distant saddle, and ambush any bucks he might push my way while still-hunting. As I sweat easily, I opted to hike in long johns and a wool shirt, then don additional layers as needed. This plan worked perfectly right up until I sat down on a cushion of pine boughs and realized that my Realtree pants were folded atop my Realtree sleeping bag back at camp. Four hours later, Gerald approached, deerless but smiling nonetheless. “Is that a Southern thing, no pants?” he asked.

Six months later, I met up with Gerald and a buddy to have a beer. I started to introduce myself to the friend, who shook my hand warmly and said, “Oh, you’re famous. Everybody in the hunt club says, Â¿Â¿Â¿You should’ve seen the guy from FIELD & STREAM who forgot his pants.’ We even have a saying now.” He dropped his voice to a TV-announcer baritone. “Pants: Don’t leave home without ’em.” (Gerald, allow me to thank you publicly. I have never met a guy who sleeps in women’s underwear who is half the hunter you are.)

Hunt with SpongeBob
As I let my daughter Emma off at kindergarten before going hunting one October morning, I pointed up and cried, “Oh, look at the hawk!” Then I palmed the SpongeBob SquarePants Sea Mail Play-a-Sound book she had been reading, which her teachers have forbidden in the classroom. I thought no more about it until I was on stand and realized I had inadvertently stashed the thing in my daypack. After not even seeing a deer all morning, and with nothing to lose, I pushed the button decorated with a giggling SpongeBob. Out came a sound like a doe bleat on helium. Intrigued, I hit it again. A doe emerged from the bushes 70 yards distant, where it stood alert and frozen for two minutes. I hit the button once more. Fifteen minutes later, I sent an arrow into that deer. I am unsure about SpongeBob’s sexual orientation, but I will say this: The boy knows deer.

Impersonate a competent person
Anybody who hunts with me regularly knows that I am essentially useless. I am physically unimpressive, have the woods sense of a parking meter, and for years thought that a “staging area” was where deer rehearsed theatrical performances. I’m tolerated by other hunters because I know my place and because a natural bent toward arson makes me invaluable in starting and tending campfires.

To make up for my defects, I religiously read the tips in this magazine, then pass them off as my own at every opportunity. Recently, when a friend was lamenting the loss of his scope covers, I plucked an old inner tube from his truck bed, cut out a ring, and wrapped it over the optics, forming a watertight seal (Sportsman’s Notebook, October 2005). “Where in the world did you learn that?” he asked, amazed. “Old cowboy trick,” I shrugged, affecting the air of a man who had grown up in a sod house on the prairie with Pa riding the range and Ma fighting off Indians.

Shut the bathroom door
Much of my rifle practice occurs with a pellet gun in the basement when nobody else is home. After a session this fall, I was sure my earpplugs had migrated almost to my brain. Rushing upstairs to the bathroom mirror, I was probing deep in my auditory canal with a Leatherman Wave when at the door I saw the mother of a child with whom my daughter had evidently missed a play date. She had entered the house when no one answered. Her face was pretty much the mask of horror you would expect to see upon discovering a man committing suicide via earhole. Her hands were clamped protectively over the eyes of her child, whom she dragged bodily backward through the living room, her mouth moving soundlessly. I watched-but did not hear-the door slam as she fled. I knew it was only a matter of minutes before my wife got word and returned home to deal with the large order of trouble with anchovies and extra cheese I had whipped up. The only question was how to spend the brief interval of peace remaining. I returned to the basement and shot a few more targets. Looking back, it was the smartest thing I did all year.