From flyfishing for sharks to hunting paranoid turkeys, these are the editors favorite read pieces of the year. 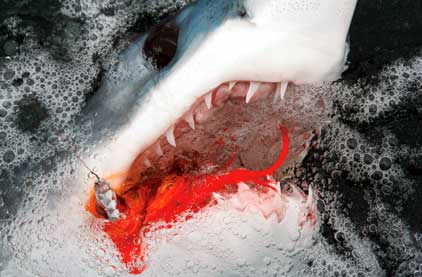 Flyfishing Gone Mad
I was the bag man, there to stuff burlap sacks with body parts. We were in a dim alley behind a San Diego fish market. Conway Bowman’s feet dangled over the edge of a Dumpster as he tossed tuna carcasses over the rim. Read More

The Biggest Deer I’d Ever Seen
The heartbeat-by-heartbeat tales of five lucky and skillful hunters who connected last season. In a big, big, way.Read More

A Soldier’s Return
In 2004, this Army National Guardsman was removed from active duty in Iraq by an RPG. Eleven surgeries and a $100,000 prosthesis later, he is getting back to civilian life one hunting trip at a time.Read More

The Promised Land
The masthead of this magazine is loaded with the names of guys who can make a fire by rubbing two icicles together, catch a tarpon on a safety pin and some pocket lint, or track a squirrel over a rockslide. When the editors want an alternative perspective, they call me. “Heavey,” one purred into the phone not long ago, “we were wondering where an Eastern hardwoods hunter-let’s say a guy with more passion than skill-would go to bowhunt the buck of a lifetime.”Read More

Fishing From Venice Beach Pier
On this narrow strip of concrete in West L.A., the exotic fish of the Pacific meet the funky anglers of Southern California. Read More

Extreme Panfishing
The tiny creeks that most anglers ignore have hotter fishing than many crowded lakes and reservoirs. All you need to reach it is a machete, a sense of adventure, and a tolerance for spiders. Read More

Paranoid Turkeys
When a tom gobbles in the spring, he can elicit three responses-and two of them are bad. Sure, he might get the girl. But he might attract a load of 6s to the snood or a spur to the breast instead. With as many turkeys and turkey hunters as there are overflowing the spring woods, you can forgive the modern gobbler for feeling a touch of paranoia. Read More

The Greatest Lake
Nothing embodies the rough spirit of Lake Superior like the steelhead of its north shore. Read More

Adventures on Bear Island
When you fly to a remote corner of Alaska, boat to an isolated cove, and stalk to within 7 yards of a giant bear, you know you’ve earned your shot. Read More

How to Raise a Hunter
You can’t force your child to be a sportsman. But if you find the right way to share your love for the outdoors with him or her, you can create the best hunting partner you’ll ever have. Read More

Cheap Shots
Finley Peter Dunne, a 19th-century columnist and cynic, said that the job of the journalist is to comfort the afflicted and afflict the comfortable, and the way I see it, hunters have gotten a little too comfortable. Read More

Fishing for Dinosaurs
The alligator gar has outlasted everything that millions of years could throw at it, but it may not surive its label of “Trash Fish.” Now, in Texas, two catch-and-release anglers are giving it a little respect. Read More

This Old Bird Knows Turkeys
The old man shuffles through the woods ahead of me, making more noise than he knows he should. He is tall and lean and 83 years old, and he carries a battered Winchester 12-gauge autoloader sheathed in peeling camouflage paint. He steps over the merest sticks and branches with difficulty. An hour earlier, in the muted glow of his truck’s dome light, he’d catalogued his infirmities as an apology for the slow pace of the hunt about to begin. “I’ve only got one eye left,” he told me, “and I lost my sense of smell years ago.” He pointed to a pair of hearing aids. “I can’t hardly hear a turkey unless he gobbles in my ear, even with these things.” Read More