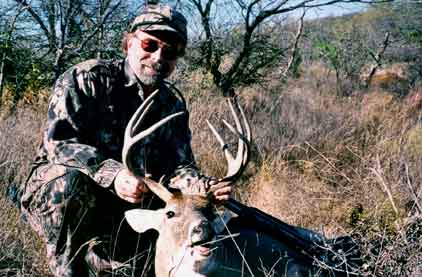 Most Novembers find me in a treestand in New York’s Catskill Mountains, overlooking some ledges and trails where I’ve taken nice bucks in the past. It’s tough hunting here, though, with the deer few and far between. So this year I figured I’d try rattling in a Texas buck before the New York season opened in late November.

I booked a hunt at Stasney’s Cook Ranch in the Texas Hill Country. The 24,000-acre ranch, about an hour northeast of Abilene, proved to be more than I could have hoped for. The first hour out of camp, on the first day, my guide Frank and I saw a 150-class buck not more than 100 yards from the truck. You can shoot deer from the vehicle in Texas, but I held off, hoping for more of a one-on-one type of hunt.

After lunch, still driving, and having seen three more shooting-sized bucks, I asked Frank if we could get out of the truck and hike a bit, maybe do some glassing and stalking. He readily agreed, and we were soon hoofing it down a rutted Jeep trail, deep in the hill country. We set up and tried rattling from one spot, and while Frank and fellow hunter Jason Nash from Federal Ammunition had a glimpse at two nice bucks that were interested in the rattling noises, no one got a shot.

An hour later, we set up overlooking a brush-choked gully, and Frank began to rattle, lightly tickling the antlers at first, then building up to an all-out fight. And it worked. Scrunched down against a scrub oak, I was watching the far end of the gully when a rack buck appeared, maybe 200 yards away. He was headed in our direction, and coming fast. In less than five minutes, he was in range, though I couldn’t get a clear view of his antlers, much less a shooting lane to his heart-lung area. I waited, heart pounding, and sure enough, suddenly I saw his head and neck pop up over the lip of the gully, looking in our direction, trying to find the source of the rattling antlers. I had a throat shot at 45 yards and took it as soon as I saw he was a huge 9-pointer. The 338 Winchester cartridge–a new caliber from Federal, one with incredible power and no more kick than that of a 30/06-did the job efficiently, dropping the buck literally where he stood.

Later in the day, toward dusk, Nash and Frank rattled in a beauty of a 10-pointer, which also fell to a well-placed neck shot from Jason’s 338 Sako. It was an unbelievable day, to say the least.

Rattling in Texas–it doesn’t get much more fun than this, especially for a Northeasterner used to hunting in 20-degree weather and not seeing many bucks in a season, much less in a day. Our day ended with two happy hunters–that is, until we saw a 165-class buck as we drove back to the ranch at sunset. My only consolation is that I know I’ll be going back.

If you’re interested in going after a trophy whitetail, contact Stasney’s Cook Ranch at 888-762-2999; www.stasney.com. Wild boar, quail, predator, Rio Grande turkey and dove hunting are also available, depending upon time of year.