A film crew in Alaska is attacked by a bear--and gets the whole ordeal on tape. 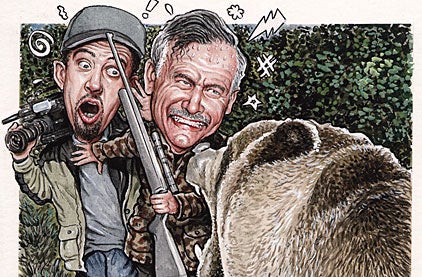 We had spotted a good boar and were working within range. There was heavy rain and winds of 25 to 30 knots, but Jim made a perfect heart shot with his .375 at 55 yards. The bear went down, got up, Jim shot again, and it went down for good.

“There’s two more,” said my assistant guide, James Minifie. And 90 yards away was a very agitated sow and cub. The sow was bouncing up and down. She probably couldn’t make us out as humans through the storm. I gathered everyone up and we began to move away, off the rise we were on. But she spotted us and immediately began charging.

You can see me on the film, yelling “Hey bear!” and waving my hands. I was hoping she’d identify me as human, because these are hunted bears and generally very wary. But at that moment, she locked onto my eyes in a way no bear ever had.

I knew she was coming, so I shouldered my .404. She was a blur coming up that rise. There was no doubt in my mind that she was going to kill or seriously maim me and then work her way through all four of us. I shot just as she came up on her hind legs to begin her launch into me, and hit just left of dead center. That rolled her over backward, and she came up facing the other way. She was pretty broken up. She only made it 20 yards before she died.

That .404 is a pre-1964 Model 70 in .375 that was necked up to a .404. I’m shooting 400-grain Sierra soft points-a lot of recoil. I was going to leave it up here over the winter. But now I’m taking it home to practice. When you get a reminder like this that your life depends on your shooting, it kind of motivates you.–as told to Bill Heavey

This episode of Cabela’s Outfitter Journal will air July 23 at 5 p.m. EST on The Outdoor Channel.