Moose on the Move 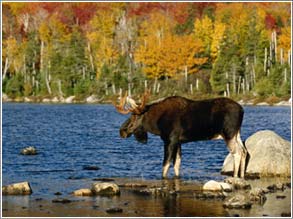 The largest-antlered animal on earth is increasing in number and expanding its range in our northern forest states. The moose — mighty symbol of deep, remote wilderness forests, undeveloped lakes, and impassable swamps — is rising steadily in intensely exploited commercial forests from Maine to Washington and down the Rocky Mountain chain into Colorado and Utah.

In fact, commercial use of the forest is what is driving the moose population to new highs, particularly in the Northeast.

Moose are creatures that thrive on forest catastrophes. Historically it was forest fires, hurricanes, and ice storms that destroyed large sections of mature standing timber and created opportunities for new growth. Long-legged moose moved into these areas of mass destruction and strode over the broken stumps, tangled snags, and upended roots to browse on the succulent sprouts that emerged there. Today the impact of such natural catastrophes is dwarfed by modern timber-harvesting techniques, which create vast clear-cuts that quickly sprout up and become enormous reserves of new growth, ideal habitat for moose.

Moose Sprawl
In Maine, which has more moose than any state but Alaska, moose numbers have risen steadily from 20,000 in 1980 to more than 30,000 today — despite annual hunting seasons that remove 6 to 7 percent of the total population. Three thousand hunters who drew moose permits in the 1999 Maine lottery harvested 2,619 moose, achieving a typical, yet astonishingly high, hunter-success rate of 89 percent.

According to moose biologist Karen Morris, the state’s moose population could double in the years ahead if forest harvesting continues at current rates.

Moose are relative newcomers in many parts of their present range. They moved south to occupy the Rocky Mountains only about 150 years ago and are continuing to spread into new territory. Only recently, moose pushed east and established themselves in Labrador. They did not exist in moose-rich Newfoundland until a small number were introduced there in the 1950s. Now it is estimated that about 1 million moose inhabit North America.

Potential moose range is limited on the south by climate; moose do not thrive where mean summer temperatures exceed 60Â¿Â¿. North, they range to the treeline, where food and cover dwindle and barren tundra takes over.

Neighbors: Deer and Moose
Until about a century ago, moose and deer ranges rarely overlapped. In the early 1900s, logging operations and land clearing in the north woods first permitted deer to expand northward into moose range. As the northern deer population grew, moose numbers began to decline noticeably.

Studies found that the moose population was being harmed by accidental ingestion of infected terrestrial gastropods (mollusks), which are carried and spread by deer. The parasite rarely affects deer but commonly develops into a meningeal brain worm that can kill moose. In the 1950s and ’60s, it was common to see moose in a dazed condition, walking in circles, and eventually dying from the effects of brain-worm infestation.

But when modern clear-cutting practices came to the north woods, moose populations began to rise and spread south once more into ranges that had been usurped by deer. As moose continued to increase and overlap with deer range, the brain-worm problem began to subside. It is possible that moose are developing resistance to the parasite, but biologists think that, more likely, deer and moose are merely choosing separate feeding areas even though they share occupancy of the same general ranges.

Deer feed around the edges of clear-cuts more than out in the middle. In winter, deer avoid exposure to cold wind and stay in protected places, while large-bodied moose just turn their rumps to the wind and continue to feed in the open. Furthermore, deer numbers are declining in the heavily clear-cuut areas for lack of sufficient cover.

** More Moose to Come**
Because moose are very impressive “watchable wildlife” and thus contribute heavily to tourism coffers, moose populations are being permitted to grow in all moose states today, although the numbers of moose hunting permits issued each year is also rising.

Although permits entitle them to take animals of either sex, most moose hunters select antlered bulls. This tendency does not slow the population growth. Before moose in certain densely populated regions reach numbers that cause unacceptably high vehicle-collision rates or other unwelcome costs, moose managers can reduce and stabilize the population at a justifiable level simply by issuing permits allowing a certain number of hunters to take females only.

Right now, and for the foreseeable future, moose — and moose hunters — in the Lower 48 have never had it so good.