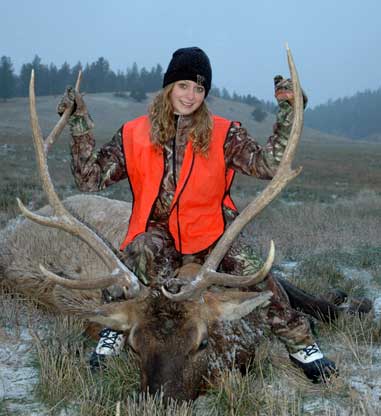 Dear Field & Stream,
My name is Carli Ausmann. I am 14-years-old and live in Wyoming. My Dad is an avid hunter and loves the outdoors, so I took a hunter's safety course last spring so I could go hunting with him. Although I had been turkey hunting with him when I was younger, I had never hunted big game. That is until I drew a Wyoming elk permit this fall. I went out and target practiced until I could hit clay pigeons on the ground at 100 yards. My Dad and I were hunting just two days when we came across a 5X6 bull elk, and I dropped him with one shot! I love to hunt and I don't think that hunting is any different for me than it is for a guy. As a conservationist, I understand the importance of hunting and harvesting. I like being a female hunter, mainly because I enjoy learning about the outdoors, and it is a great family adventure. My male classmates gave me a little static for outdoing them, but that's their problem.
Sincerely,
Carli Ausmann. Field & Stream Online Editors
SHARE

Though part of Quebec, Anticosti Island stands alone as a hunting destination due to its unusually high deer densities and limited access. “No one part of the island is better than another for big bucks,” says Gilles Dumaresq, a manager for Sepaq Anticosti (800-463-0863), the government-run outfitter that controls access to most of the island. A Sepaq guide will assign you a hunting area. Once there, hunt the edge cover, particularly where open bogs and fields meet thick stands of spruce. Early morning and late afternoon to evening are the best times. What Anticosti may lack in trophy potential it makes up for in overall numbers. “Year after year, the deer population on the island averages about 125,000,” says Dumaresq, who also notes that 90 percent of Anticosti hunters go home with two deer. Those hunters interested in heading to Anticosti should know that this year will mark just the second time that a December hunt will be offered on the island.