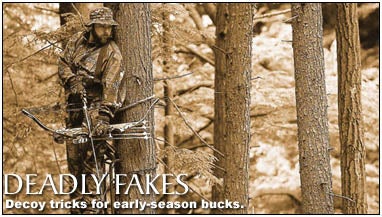 During a September hunt, Williams decoyed in one of his finest whitetails to date-a 160-class 12-pointer. “A friend had spotted the buck feeding in an alfalfa field just prior to the bowhunting opener,” Williams recalls. “He’d seen the buck enter and leave the field at about the same spot, so I figured the deer felt safe there and was bedding nearby.”

Visiting the field at midday of the opener, Williams found the buck’s entry trail. Then he got innovative. “There were no suitable trees for hanging a stand, so I built a small ground blind along the field edge,” he says. “When I came back to hunt, I brought my buck decoy and set it up in the field just within bow range. I used the decoy because I felt the buck would enter the field and head right to the middle of it. I needed something to keep him close to my blind.

“When the buck showed up, he peered into the field, saw the decoy, and walked slowly toward it, as if he needed to check out the stranger. He wasn’t aggressive or bristled up, but he couldn’t resist investigating. He passed broadside at 25 yards.”

To dupe your own early-season deer with a decoy, follow these three tips from Williams:

(1)**** Think Bucks Only Doe decoys will agitate and eventually spook other does, ruining your setup. Always use a buck decoy instead. During the early season, bucks are still curious about other bucks, especially the smaller ones.

(2) Place It Head-On Your decoy should face the direction from which you expect the buck to appear. This makes an approaching buck believe that the “deer” he sees is looking at him. If the fake is facing away, the buck may become alarmed, sensing that the motionless deer is staring at danger.

(3) Put It in Plain Sight Deer can’t react to a decoy they can’t see, so keep yours in an open area-such as by a prime early-season food source-where it’s most visible to other bucks. If a buck sees your decoy but doesn’t respond, some soft calling can help. “If you’re going to call, keep in mind that less is more when hunting with decoys,” Williams says. “If your buck is coming in, stay silent. But if he’s reluctant, a little soft grunting is often all that’s needed for him to march right in.”