How to introduce a child to hunting--even if he's not your own. 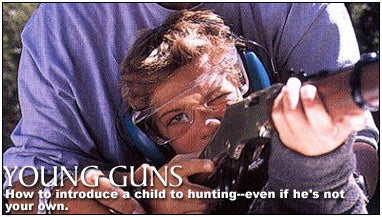 I TURNED THE REARVIEW MIRROR so I could look into the backseat. Two boys, aged 12, sat strapped happily in the back of my van. Gordon, my son, clutched a wood duck as if it were a stuffed animal. Nathan, next to him, was playing with the long bill of the snipe he’d shot. Curious as to how they’d respond, I asked: “Doesn’t it bother you guys that we killed things today?”

I’m not sure they even spoke. They didn’t have to. I could read their astonished expressions: Hadn’t we gone hunting to kill birds? Wasn’t that the whole point?

I shouldn’t have been surprised, even if it was my first weekend of hunting with kids. Part of me thought that as seventh graders, the boys were old enough to feel the conflicted emotions about killing that we adults often experience. But at 12, the boys were no different than all the younger children I’ve taken fishing, none of whom ever thought catch-and-release was a good idea. Most kids don’t consider a fish caught until it’s on a plate and underneath a lemon wedge. It’s not that they lust to kill. They just want very badly to bring something home.

Taking these boys afield over the last two seasons, I’ve tried to help them discover other kinds of trophies: an appreciation of nature and a knowledge of wildlife behavior. Nathan saw a vivid illustration of the pecking order in turkey society when an agitated hen picked a fight with our decoy, strutted and fanned her tail at it, then ran away, putting angrily. Gordon, a horror movie buff, will never forget the Hitchcockian cloud of thousands of blackbirds that swirled noisily into the cattails behind us during a duck hunt. In between serious lessons in bird and animal identification, I’d take time to show them the joy of jumping on dried puffball mushrooms, or we’d put the guns down for a quick acorn fight.

At first, I never took my own gun along. I needed to be watching, teaching, making sure the boys were safe. A hunt with kids needs to be totally about them, conducted at their pace, pitched to their endurance level and attention span. We’re always ready to take a snack break or quit before we get too cold, tired, or bored.

I started to really enjoy not carrying a gun. Feeling no tension about shooting anything, I was free to fully enjoy the kids’ excitement. And I’ve got my ulterior motives: If I keep these boys hooked, in a few years, I’ll have strong, young backs to take the place of mine at decoy-humping and deer-dragging time. There’s another, greater, burden on those strong young backs. They represent the future of hunting and conservation. There are plenty of candidates ready for the job, too. I’ve watched Cub Scouts at a day camp step up to the firing line of the BB gun station, and it’s obviously the highlight of their day. They stop hitting each other, quiet down, pay rapt attention, and proudly carry the targets home. For too many, however, a few shots a year at summer camp is the closest they ever come to hunting.

Nathan and Gordon
My son’s classmate Nathan represents those hunters we lose without even knowing it. Aside from an ecstatic week each summer when he could spend all his free time at camp shooting .22s, Nathan had no exposure to firearms. Yet from the time he was young, he liked to wear hunting clothes, backpacks, and camo hats. He was all dressed up with no place to go because neither his father nor his mother came from a hunting background.

Fortunately, Nathan’s mother mentioned her son’s enthusiasm to my wife one day. Pam asked me if I’d mind taking him out. Nathan’s parents thought I was doing them a tremendous favor, when, in fact, it was quite the other way around.

My son, Gordon, represents the traditional model of recruitment to the ranks of hunters. Like me, he grew up in a house full of guns and dogs. Brushing English setter hair off his backpack is part of getting ready for school, and picking pelle out of his teeth is dinner-table routine.

Gordon would either express an interest in hunting or he wouldn’t, but there was never any doubt that he’d have the opportunity. He came along a few times on duck and squirrel hunts when he was 8 or 9 and was always happy as long as he had a book and some snacks. After a while, I’d ask him if he wanted to go and he’d say, “Do I get to shoot anything?”

When both boys turned 12, it was time to take them hunting.

Planning
Doing anything with overscheduled suburban kids requires making plans long in advance. In the spring, my wife, Nathan’s mother, and I compared calendars and marked the dates of their first hunts. With the days “on the calendar” in ink (we modern husbands have learned to dread the phrase “it’s not on the calendar”), I took the boys through hunter education and spent the summer teaching them to shoot shotguns.

D-Day (Duck Day) fell early in October. I’d picked the Federal Youth Waterfowl Hunt days-a weekend set aside for kids only-as the boys’ first outing. Scouting with a fervor I rarely muster for my own hunting, I found a pile of ducks feeding in a thick stand of millet a short walk from an easy parking spot. I enlisted my friend M.D. to serve as Nathan’s personal ammo bearer. With M.D. would come his collection of 50Â¿Â¿ yard-sale lawn chairs covered with camo tape-the perfect marsh seats-and another father and son.

The Hunt
We all met an hour before shooting light, giving us time to set everything up. We left the three boys to sleep in the cars and went to work. The woodies flushed, squealing in protest at our arrival as we waded in to set the lawn chairs in foot-deep water. We tucked the seats back among the high stalks, then threw out four dozen decoys. Half an hour before sunrise found us hidden in the millet, an adult crouching behind each kid, ready to administer ammo, hot chocolate, granola bars, hand warmers, and advice.

The wood ducks came back in twos and threes at first light. Teal and mallards flew later. At morning’s end, a flock of pintails circled warily for 10 minutes before landing in the spread. Two-thirds of the shooters shot a couple of pintails, two drake woodies, a greenhead, and a shoveler. The remaining third, my son, shot nothing but sky.

Caught up in self-congratulation at putting my shooters into swarms of ducks, I was too thick to notice Gordon’s disappointment. It was one of the best duck hunts I’d ever been on, and I made the mistake of saying so at great length. Gordon wore a brave face until we got home, then informed his mother that he had been humiliated, his father was insensitive and clueless, and he would not go tomorrow. Pam told him he’d feel worse if he stayed home. Gordon stoically set his alarm for 4:30.

The next morning, just Gordon, Nathan, and I went out. We waded a few steps from shore, where I filled a pair of 5-gallon buckets partway with water and snapped the lids in place to make stable seats. I threw two dozen decoys onto the black, motionless water. Only a few ducks stirred as the sun rose over the placid marsh. A river otter swam through the decoys. White pelicans skimmed low, their wing tips nearly brushing the surface like the Spruce Goose on its maiden flight. It took Gordon precisely the amount of time required to finish three cups of hot chocolate to realize that the best parts of hunting can be the long intervals between trigger pulls. “Dad,” he asked, slurping down the dregs of that third cup, “when can we go again?”

His reward, and my redemption for the errors of the day before, came wrapped in olive-gray feathers. A hen wood duck buzzed the spread. With Nathan on shore refilling his cup, the chance was Gordon’s alone. He lurched to his feet, swung, and shot. The bird splashed down with a broken wing, and I was off in pursuit, the duck leading me out to the middle of the bay. I wasn’t letting this bird escape if I had to take Gordon’s gun apart, dive beneath the surface, and breathe through the barrel to continue the chase. Cold water trickled over the top of my waders as I caught the duck and turned to carry it back to my son waiting on shore. Even from that far away, he looked taller.

Growing Into Hunters
In the two years I’ve been hunting with them, the boys have grown from kids into young teenagers. Soon they’ll have to face the realities of crowds, leases, fees, dwindling access-lessons I still don’t know how to teach them.

“You mean you can hunt here anywhere?” Nathan asked me as we drove past acres of prime pheasant cover on the public hunting area near my home. We’d just hunted the youth pheasant season, when kids age 12 to 15 can take one bird the weekend before the regular season begins. Gordon had killed his bird with me in the morning. Nathan ended the afternoon hunt with one shot after 45 minutes. I could see the wheels turning in Nathan’s head as he looked out the window. He was imagining hunting on his own on this place: 13,000 acres, 15 minutes from town, full of birds, not a soul on it but us.

“Yeah, it belongs to the state. It’s open to everyone,” I said, biting back the rest: Starting next weekend, this place will be full of people every day. Not too many birds survive the first two weeks of the season. It’s a long way between roosters after that. When you’re too old for youth season, you’ll find out for yourself.

It’s natural to want to shelter them. But these boys have the desire to hunt even without societal or peer support-none of their friends hunt, and it’s nowhere near as accepted as it was when I was young. So I have to put aside my misgivings and believe that they’ll grow up to make their own way in whatever hunting world we bequeath them.

The alternative is to write off the next generation of hunters as already lost, insulated from the wild in the suburbs, absorbed in television, sports, video games, and trips to the mall. If that’s true, whose fault is it?

My Lesson
For kids, an animal brought back from a hunt is more than a souvenir. It’s a trophy, commemorating achievement. It’s a real, live dead thing. At a time in their lives when kids are coming to terms with the permanence of death, an animal in hand makes the abstract concrete.

It’s probably fair to say that not too many people in the suburban development where Nathan lives had ever seen a dead turkey until we hauled a 25-pound gobbler into his parents’ garage last spring. Somehow, word spread. Junior-high boys and girls filled the garage where I was showing Nathan how to clean his turkey. Not one of them offered the expected “Ewwww, gross.” Instead, they flapped the wings, opened and shut the beak, played with the big, st to the middle of the bay. I wasn’t letting this bird escape if I had to take Gordon’s gun apart, dive beneath the surface, and breathe through the barrel to continue the chase. Cold water trickled over the top of my waders as I caught the duck and turned to carry it back to my son waiting on shore. Even from that far away, he looked taller.