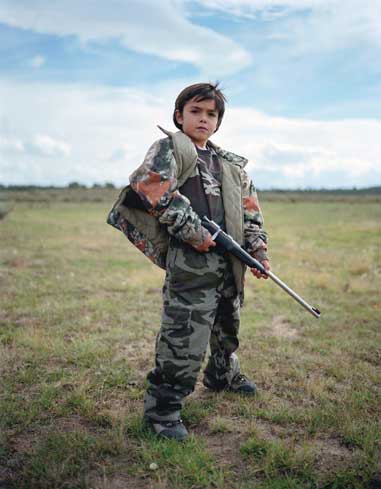 Photographs by Erika Larsen
Interviews by Thomas McCafferty and Brian McClintock If hunters are a dying breed, no one told these kids. That was the message Erika Larsen returned with after more than a year of photographing young hunters all over the country. In the face of studies that cite fading interest among youth in traditional outdoor sports, Field & Stream dispatched Larsen during last year's hunting season to get beyond the numbers. Her goal, she says, was to capture the intense connection that kids have with the natural world, to tap into their raw enthusiasm, and to get at the pure, unfettered joy of the hunt. "These kids were all hunting for the experience of it," says Larsen. "To them, anything they shoot is a trophy. They weren't looking to make it into the record books; they were just excited to be out there." If you read the latest U.S. Fish and Wildlife study, you might think there soon won't be an American child left who wants to spend time in the woods. But on the following pages are 20 future sportsmen and -women who don't care about statistics yet. They want to go hunting, and from the look in their eyes, they'll be doing it for a long time. -The Editors. Erika Larsen
SHARE

Coyote hunting is probably better now than ever in Southern California; with the state ban on trapping and poisoning, and with no concerted efforts by the state and counties to eradicate coyotes, the dogs are everywhere. Young coyotes, looking for their own home ranges, often can be seen walking down the main streets in desert cities. I particularly like the East Mojave Preserve for coyote hunting (this is U.S. Park Service land). It is far enough away from the major metropolitan areas to get only sporadic pressure. Focus on water sources in the Providence, New York and Mid Hills regions. This may, however, be the last winter coyotes will be legal game in the preserve. If the final draft of the general management plan is adopted, all predator hunting could be banned. But the Department of Fish and Game and several hunting groups were fighting with the Park Service over this recommendation at press time. Contact: Bureau of Land Management for maps of the Mohave Preserve (2800 Cottage Way, Room W-1834, Sacramento, CA 95825; 916-978-4400).