Patterning is not exactly fun, but then neither is missing. 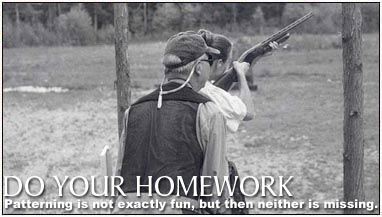 Does your gun shoot straight? Does it shoot too tightly to hit the game you’re after? Are your patterns too sparse to kill cleanly? There’s only one way to find out: Blast holes in large pieces of paper. A tedious chore under ideal conditions and a paper chase on a gusty day, patterning tests any shooter’s resolve. Homework must be done, however.

Forget about figuring percentages at 40 yards; practical patterning should be done at whatever range you typically shoot your birds. Staple a 40-inch-square sheet of paper to a backstop, retreat the appropriate distance, and shoot from a solid rest. Label the target with gun, choke, load, and distance, put up another piece of paper, and shoot again.

And again. You can’t meaningfully evaluate guns, chokes, or loads on the basis of one or two shots on paper. Patterns are like snowflakes or fingerprints; no two are exactly alike. Pellet counts and velocities can vary up to 10 percent from shell to shell. Three patterns made with the same choke and load at the same distance will give you a rough idea of what’s going on. Five or 10 are better. Incidentally, changes in temperature and humidity affect patterning. If you plan to compare different chokes or loads head-to-head, you really should shoot them on the same day, or at least under similar conditions.

Point of Impact
When you analyze your targets, draw a 30-inch circle on your sheet with the densest cluster of pellets at the center. You don’t have to count the holes. Look for a pattern that fills the circle to its fringes with enough pellets to put four or more hits on the vitals of the species you’ll be hunting. You can make cardboard outlines of ducks, grouse, geese, and pheasants and trace around them on the sheet, or simply eyeball the pattern.

Will there be gaps in the pattern? Yes. There is no such thing as a perfectly even pattern with one pellet strike in every square inch of the circle. Shot charges cluster pellets more tightly in the center and spatter them randomly around the fringes. That’s how patterns are. If, however, the pattern has significant gaps in it where only one or two pellets strike the bird, you’ll need smaller shot, a heavier shot load, or a tighter choke. Patterns that are overly dense in the center and weak on the fringes indicate you’re using too tight a choke. If one quadrant of the circle consistently has very few holes in it, there may be a problem with the choke itself. Before you pronounce your gun in need of a choke doctor, shoot 10 or 15 patterns to be sure the gap appears consistently.

Fooling with flapping sheets of paper, taking aim, and punching holes is no fun. Homework rarely is. But when the final exam comes in the form of a greenhead over your decoys or a quail buzzing into the brush, it’s good to know that your shotgun throws enough pellets to fill in the blanks.