Phil Bourjaily reports on the most promising shotgun gear from the 2009 Shooting, Hunting and Outdoor Trade Show 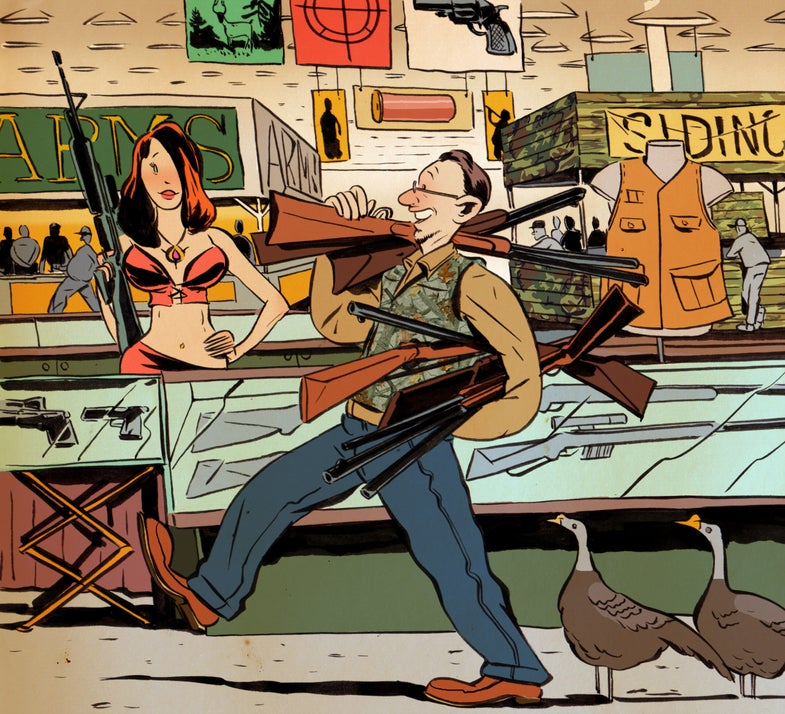 The West Concourse of Orlando’s Orange County Convention Center measures 1.1 million square feet. As the ­OCCC’s factoid sheet points out, the exhibit hall is so big you could lay the Sears Tower on its side, put it in the West Concourse, and have room to spare. Cram that huge space with hunting and shooting gear, decorate it with a few booth babes, and you’ve got the 2009 Shooting, Hunting and Outdoor Trade Show.

The big sellers at SHOT this year were black guns and tactical gear. But the industry thinks hunters have money to spend, too–I saw plenty of innovation intended to appeal to us. Of the thousands of items on display, here are eight that made an impression on me in one way or another, from least tempting to most:

The Takeaway: Benelli wins the Chutzpah Award for introducing an auto with no engraving, a synthetic stock, and a mind-boggling price tag during a global economic meltdown. It’s the ultimate Argentina dove shooter, but for what it costs you can buy a nice over/under, or a ton of canned goods.

The Takeaway: I find the comeback of full-bodies depressing. They’re too bulky for mobile hunters; they’re intended for the increasing number of pop-up blind potatoes who sit inside a dark nylon cube drinking coffee and looking out the window at a little slice of the outdoors. Still, the Shady Lady is gorgeous. The decline of turkey hunting never looked so good.

Wildside Siding $3 per square foot; wild​side​camo.com For those who still have money to spend, ostentation is out. “Stealth wealth” is in. How better to hide that extravagant second home than to cover it in Mossy Oak Obsession? For the rest of us, WildSide siding is perfect for shooting houses, sheds, cabins, and duck shacks.

The Takeaway: No one needs camo siding, but will people buy it anyway? Oh, yes.

Winchester Model 101 $1,659 and up; winchesterguns.com Winchester’s 101 is not your father’s Japanese 101, but a Belgian-made o/u formerly known as the Supreme, the Select, the Select 101, and now, the 101. I shot one of the first Supremes eight years ago, when it was a well-engineered, low-profile o/u in a very ugly package. Winchester has fiddled constantly with these guns to make them look and feel right, and now they’ve got it.

The Takeaway: An underrated gun gets a deserved makeover, at a price that’s a good value.

Remington 887 $399; remington.com I planned not to like Remington’s ugly new 31⁄2-inch pump, but as I shot one at an event before the show, it grew on me. The 887’s receiver and barrel are completely encased in plastic to withstand the dunks and dings of waterfowl hunting. This isn’t a plastic-coated 870 but an all-new design with some nice touches, like a slide release in the front of the trigger guard.

The Takeaway: This is a weatherproof pump that feels less hideous than it looks. And it’s priced to abuse.
**
Ithaca Model 37 28 Gauge** $999 and up; ithacagun.com Ithaca keeps folding and coming back because the Model 37 is too beloved to die. I was delighted not only to find Ithaca at SHOT this year but to see that their booth contained a scaled-down 28-gauge weighing under 6 pounds.

The Takeaway: A $1,000 28-gauge pump is the very definition of niche gun, but some nostalgic bird hunters will go nuts over it.

Winchester Xpert Game and Target Small Gauge Steel $12 for 25; ­winchester.com As more upland areas go lead-free, these steel loads will keep your smallbore from becoming a safe queen. I shot them in 28 gauge and .410 at the pre-SHOT media shooting day, and when I pointed the gun straight, they smashed targets.

The Takeaway: This is much-needed ammo for our lead-free future. Unfortunately, some people will misinterpret these as loads for kids to shoot at ducks. With just 3⁄8 ounce of No. 6 shot in .410 and 5⁄8 ounce in 28 gauge, they aren’t.
**
Knight & Hale Pack Rack** $20; ­knight​and​hale.com Knight & Hale’s Pack Rack looks like no other rattling call, but the two pieces of plastic sound just like sparring bucks when you knock them together. The hollow handles function as sound chambers, and better yet, one nests inside the other for noise-free transport.

The Takeaway: You search the booths at SHOT looking for a Better Mousetrap, and sometimes you find one. This compact call sounds great, and you can’t smash your fingers with it. That’s progress.